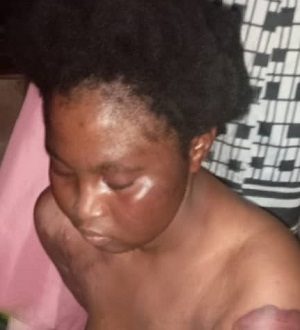 A man who inflicted cutlass wounds on a helpless woman has gone into hiding to escape arrest.

The Suame Police in Kumasi have identified the suspect as one Iddrisu, but what influenced him to attack the lady still is unknown.

The unexpected attack, reportedly, happened on the night of November 25, 2022 at Suame Magazine Zone-One in Kumasi in the Ashanti Region.

Christabel Kolkpaka, the victim, has since been treated and discharged from the hospital as efforts are underway to arrest Iddrisu.

The police said a Kumasi-based lawyer (name withheld) visited Suame Magazine on November 26, 2022 and he saw the injured woman lying down.

The legal practitioner quickly informed the police who visited the place and rushed the injured woman to the hospital for treatment.

“On 26/11/22, at 1500hrs, a lawyer of unmarked address – Suame, called at the station and reported that about 1300hrs same day, he visited a friend at Magazine/Suame and had information that a young woman he does not know was brutally assaulted the previous night and was lying helpless in her room at Zone One – Suame Magazine.

“That he visited the said place and indeed met a lady who had sustained multiple cutlass wounds all over her body lying on a mat in her room.

“Upon receipt of the complaint, police and the complainant proceeded to a section of “zone one”/magazine and found a fair-coloured lady aged about 21 years who mentioned her name as Christabel Kolkpaka”.

According to the police, there were multiple machete wounds all over Christabel’s body as she was bleeding profusely and looking very weak.

“She was looking very week. When asked, she mentioned one Iddrisu as her assailant. She was rushed to Tafo Government Hospital where she was admitted, treated and later discharged,” the report said.

The police disclosed that they went to suspect Iddrisu’s shop to arrest him to assist in investigations but he was not found.

Suspect Iddrisu, the police report indicated, “was then contacted on his cell phone and warned to report himself to assist investigations.”