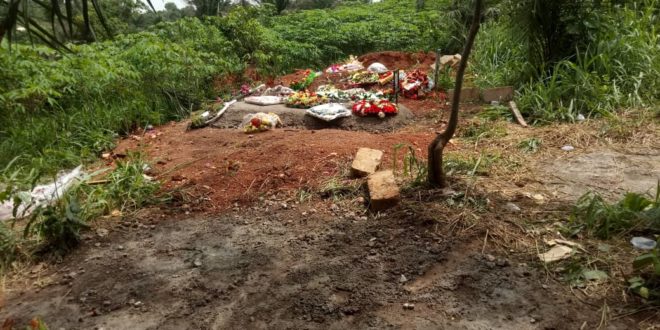 A chief at Pramso in the Bosomtwe District of the Ashanti region, Nana Gyanpon-tua II has ordered the exhumation of some remains buried at the community’s cemetery a new area at a riverside in Pramso.

According to the report, the chief has sold the old cemetery to a private developer.

According to him, the chief has a personal interest and alleged the area has been sold by the Chief to a private developer for two million cedis.

Responding to this on the show on Tuesday 29th March 2022, Nana Gyanpontua II refuted the allegations leveled against him as having no basis and should be treated with all contempt it deserves. According to him, the relocation was to pave way for some development after he received the go-ahead from Manhyia.

“I ordered for the dead bodies to be exhumed from the old cemetery and rebury them at the new place. I had received permission from Manhyia to undertake that action”

Meanwhile, Residents in the community said they disagreed with their chief sensing some fishy intention to use the land for his personal interest.

According to them, they believed Manhyia would only permit the Chief to clear a portion of the cemetery for road construction being undertaken by Kofi Job construction but not to clear the entire cemetery.

They threaten to resist any attempt to continue this exercise by the Chief because it’s against the customs and traditions of the area.

The exercise which was carried out without strict monitoring and supervision from health experts is likely to spark health implications within the community.

Speaking on the show the deputy regional director in charge of public health, Dr. Michael Rockson Adjei described the exercise as disgusting but promised to send a surveillance team to the community. The Bosomtwe district assembly was yet to respond to the issue at the time of filing this report.

I'm Adwenpa-Hene |Blogger & Broadcaster Journalist. I am the CEO and manager of this noble website. I publish on Entertainment, Sports, Politics, Lifestyle, and Technology. You can also follow Us on : YouTube Channel - My Ghana Media TV, Facebook - MyghanaMedia TV , Twitter - @MyGhanamedia2 & Instagram - My Ghana Media TV. Email Address: [email protected] Contact Us: 0200818719
@@MyGhanamedia2
Previous Full Speech On The State Of The Nation Address By President Akufo-Addo
Next Accra: Community Police Assistant Jailed For Fraud, Impersonation