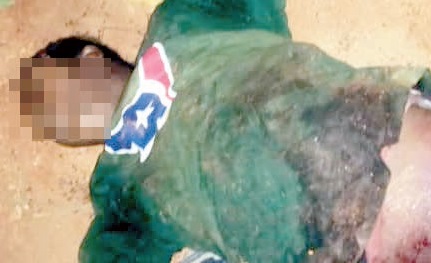 Police Officers  at Atwima Yabi in the Atwima Kwanwoma District of the Ashanti Region have reportedly gunned down one suspected armed robber in the area.

That was after a three-member gang engaged the security officers in a shoot-out on the Atwima Yabi-Dida Road at about 2am yesterday.

The suspected robber died after bullets hit him in the abdomen, but two of his accomplices who sustained gun wounds managed to escape.

Assembly Member for Atwima Yabi Electoral Area, Joseph Osei Tutu, who briefed DAILY GUIDE on the incident, said the residents made distress calls to the police about the suspects’ operation.

See also  One Armed Robber Arrested, Others Being Pursued For Killing A Police Officer

According to them, when the police arrived at the scene, the suspected robbers engaged the police in a gun battle, leading to the death of one of the gangsters in the process.

Mr. Osei Tutu said he has appealed to the members of the community to be on the lookout for any strange persons in their midst, so they can report to the police for their arrest.

“Any native doctor who accommodates these miscreants in their home to give them treatment, does so in his or her own peril,” he warned, adding that the law will deal with anyone that tries to house them.

The Assembly Member complained about how these persons suspected to be armed robbers have been terrorising residents of the area, culminating in the loss of lives and valuable items.

He said he has personally managed to engage some policemen in the community to protect lives and property. He has, therefore, appealed to stakeholders and well-meaning residents to support him to construct a police post in the community to help control crime in the area.

Meanwhile, the body of the deceased has since been deposited at the morgue for preservation.

I'm Adwenpa-Hene |Blogger & Broadcaster Journalist. I am the CEO and manager of this noble website. I publish on Entertainment, Sports, Politics, Lifestyle, and Technology. You can also follow Us on : YouTube Channel - My Ghana Media TV, Facebook - MyghanaMedia TV , Twitter - @MyGhanamedia2 & Instagram - My Ghana Media TV. Email Address: [email protected] Contact Us: 0200818719
@@MyGhanamedia2
Previous Zoomlion Ghana: We Have No Mandatory Towing Deal With GPRTU
Next ILO: 73m Young People Globally Can’t Find A Job This Year