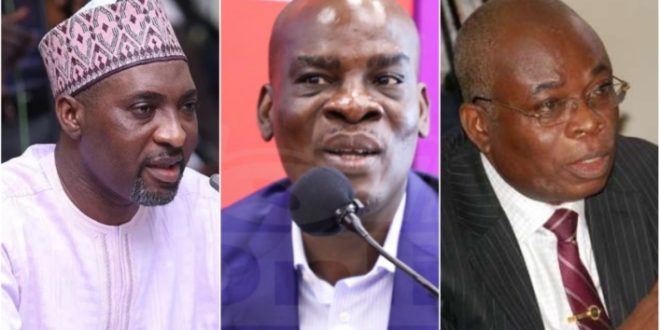 Haruna Iddrisu’s spell as leader of the National Democratic caucus in Parliament came to an end on Tuesday, January 24, 2022 when the Asiedu Nketiah-led national executives announced that it had rang changes in the leadership of the minority caucus.

From January 2017, Haruna Iddrisu has served as the face of the NDC in Parliament but a palace coup as it could be described has seen him and two others being replaced in the minority leadership.

As confirmed by Murtala Muhammed, the members of the Minority caucus had no prior discussion with the party’s leadership about the decision to oust Haruna Iddrisu, Muntaka Mubarak and James Klutse Avedzi and replace them with Dr Cassiel Ato Forson, Kwame Agbodza and Emmanuel Armah-Kofi Buah respectively.

The decision has spurred heated discussions and GhanaWeb highlights the confirmed and reported reasons behind the move by Asiedu Nketiah and his cohorts.

According to the National Chairman of the party Johnson Asiedu Nketiah, the move is part of a process of restructuring that has been going on for the past year.

“We started more than a year ago, we started at the branch level. We have since done elections in about 40,000 branches and then from there we proceeded to the constituency level. We are done largely with all the constituencies, we have done regional elections and we just completed our national election and the next is to look at our leadership in Parliament. That is what we have just done,” he said.

Asiedu Nketiah also explained that the alterations are necessary to keep the party in the driving seat for the 2024 elections.

“We know for instance that going into election 2024, the economy is going to be the major battle ground and so many of the debates will focus on the economy. So you better put your best man in economy forward that is what we have done.

“We also looked at energy. You know the petroleum and electricity challenges, so we needed to settle on Kofi Armah Buah, our former minister to be the Deputy Minority Leader.

“The other area is infrastructure, Kwame Agbodza being our man in infrastructure should play a key role that generally is what informed the changes,” he added.

Asiedu Nketiah also said that the party wanted to ensure that there is regional representations in its leadership in Parliament .

He stressed that, “the Change has nothing to do with the performance of the leaders at all. What it has a lot to do about is that the environment is changing, so if you are a football coach and the team you are facing and the game style they are adopting is not in keeping with the players you have put out there, you will do yourself a lot of good.”

Whereas Asiedu Nketiah has made mention of the above reasons, GhanaWeb has also discovered some factors that might have influenced the decision to oust Haruna Iddrisu and his cohorts from the leadership.

See also  What Power Do You Have To Remove Adwoa Safo From Parliament? – Speaker Questions NPP

Within the minority caucus and the party, there is a feeling that the impact of the hung parliament is not being felt and that is largely due to the decisions and indecisions of Haruna Iddrisu and Muntaka Mubarak.

GhanaWeb sources indicate that Haruna Iddrisu and Muntaka Mohammed were the main targets of this move and that the others were just collateral damages.

An NDC source told GhanaWeb that majority of the backbenchers in Parliament have not been satisfied with the how the ousted leadership have handled issues in Parliament.

There is a feeling within the backbenchers that Haruna Iddrisu and Muntaka Mubarak have in certain situations like the vetting and passing of the ministers particularly Ken Ofori-Atta as Finance Minister, appeared to have adopted a stance contrary to the viewpoints of the backbenchers and the leadership of the party have been made aware of the growing disaffection.

According to reports, from the moment Muntaka sparred with Alban Bagbin, the Speaker of Parliament and followed up with that explosive interview on Joy News, his position became untenable.

Reports say that the party’s hierarchy was furious with the conduct of Muntaka Mubarak and coupled with his struggles back in his Asawase constituency, the party thought it wise to relieve him of his role to make him focus on his dealing with those issues.

See also  John Mahama as a flagbearer Of The NDC Is Already A Disaster For The Party - Paul Kwabena Yandoh.

This narrative is being pushed largely by Paul Adom-Otchere and Titus Glover. According to them, Asiedu Nketiah is using his office to victimize Haruna Iddrisu who did not back in the national chairmanship elections.

It will be recalled that Haruna Iddrisu issued a rejoinder to a statement by Ahmed Ibrahim, the Deputy Minority Chief Whip that the caucus had settled on Asiedu Nketiah as their choice for the chairmanship position.

There is also a feeling within the NDC that Haruna Iddrisu was becoming too powerful and had to clipped before he became a threat to the interest of the those in decision-making positions.