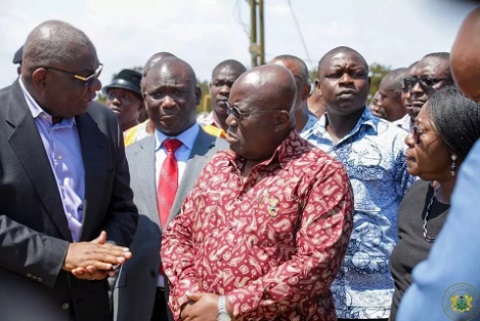 The president, speaking on Otec FM during his tour to the Ashanti Region earlier this month said he is unfazed by threats against him by some residents of Kwabire who insist that they will not vote for the NPP if their roads are not fixed.

The president in response said; “people make those kinds of threats, me, they don’t frighten me. “There is no need for people to say if I do not do it, this or that. That is your own problem. Of course, I will fulfil my promises.

“But if it so happens that you decide to vote for the NDC, that is your problem, that is not mine. Nobody will hold your hand to thumbprint for any candidate, the most important thing is that I understand the responsibility and we will deal with it,” he stressed.

According to him, the utterances of the president were needless and uncalled for considering how significant residents of the area have been to the fortunes of the NPP and how much they had begged them in the past for their votes.

He recounted how the same NPP led by now President Akufo-Addo, mounted platforms in the region to campaign for the votes of these people.

“I wanted to turn it off because I didn’t want to hear it in my ears. When I heard Akufo-Addo’s words, I wanted to run away from the video clip. When you are a politician, you hear a lot of ‘no this, no that’s”.

“In 2014, Kumasi people were saying; No Nana, No vote. In 2008, 2012, 2016, 2020, I went for all of these campaigns – myself and others like Lord Commey, we’ve been on so many campaigns compared to others. We didn’t go to tell these voters during these campaigns that they can vote for whoever they want and that if they want the NDC, it is their own issue.

“That’s not what we told them. We went with strategy, sweet words, and pleas, to relay our messages to the voters.

“For instance, at Sehwi Akontombra, Twifo Praso, it was raining but we still stood in it, begging for votes. We even got teased by Mahama that we were going round, begging for votes, Akufo-Addo told him that the votes belong to the voters and that we need to beg them for it; and he was right.

“We didn’t tell them that if they wanted to vote for the NDC, it was up to them. So in 2024, are we going to tell them that where they choose to send their votes is up to them? No. We went to beg with pledges, but if we haven’t been able to do it, it doesn’t mean we should say what we want,” he added.

Boakye Agyarko further apologized to the residents of Kwabire, asking that they look past the seeming hurtful statements of the president, and remain loyal to the NPP in the next elections.

“Some parties belong to individuals but per our tradition, this party does not belong to one person, it belongs to all of us. If one person says something and it doesn’t go well, it affects all of us. We apologise. If you see the vote these people give to us, they need pampering. So what I’m asking is that they should tamper justice with mercy,” he said.

“The elders say, it is a king who is going into public that has people dancing behind him, not the one returning. So I ask that you forgive us and consider the love you have for us because you have a great stake in the party, so you continue to vote for us and move forward together, he further added.