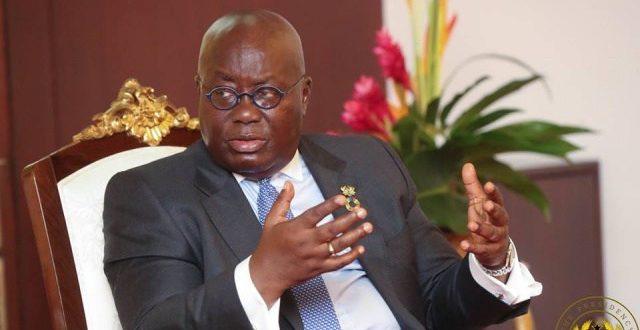 The President of Ghana, Nana Addo Dankwa Akufo Addo says his promise to build a harbour at Cape Coast while campaigning in the run-up to the 2020 elections was a mistake.

According to him, he was only human and could make a mistake at any point in time, saying the initial plan was not to build a harbour at Cape Coast.

President Akufo Addo, the then Candidate for New Patriotic Party (NPP) promised to build a harbour in the Central Regional capital while campaigning in the run-up to the 2020 elections.

However, later, he said the commitment was never to build a harbour, rather, a landing site.

This certainly did not go well with the people of Cape Coast after their hopes were raised.

During an interview with Peacefm on Thursday, October 21, 2021, the President said,”It was a mistake and I have to apologise to the people of Cape Coast.”

The manifesto was launched on Saturday, August 22, 2020, at the University of Cape Coast, where the President made his comments.

Did The NPP Promise To Build A Harbour In Cape Coast? – Fact-Check

The issue of a harbour and an airport in the Central Region has been topical in years past, especially because of the region’s tourism potential.

Commenting on the promise, the Vice President, Dr Mahmoudu Bawumia, who presented highlights of the 2020 manifesto of the NPP, said, “People of Cape Coast, I have good news for you. We are building a new harbour in Cape Coast and a new airport in Cape Coast.

Akufo-Addo: ‘I Never Promised To Build A Harbour In Cape Coast’

President Nana Akufo Addo has told a Cape Coast-based radio station, Eagle FM, that he never promised to build a harbour in the Central Regional capital whiles campaigning in the run-up to the 2020 elections.

The facts, however, shows the President’s claims are untrue.

President Akufo-Addo was speaking with Babara Obeng Dwamena Mensah on the ‘Kokroko’ Morning Show on Monday morning at the start of a two-day tour of the region.

When asked the status of a promise to build an airport and a harbour in Cape Coast, the President said, “The commitment was never to (build) a harbour. It was to a landing site. It is very, very important. And you look into page 88 of the NPP manifesto for the 2020 election. It’s very clear”.

He then went on to list landing site projects that government had initiated in the Central region, going further to say that it was similar landing sites that the party promised to build in Cape Coast and not a harbour.