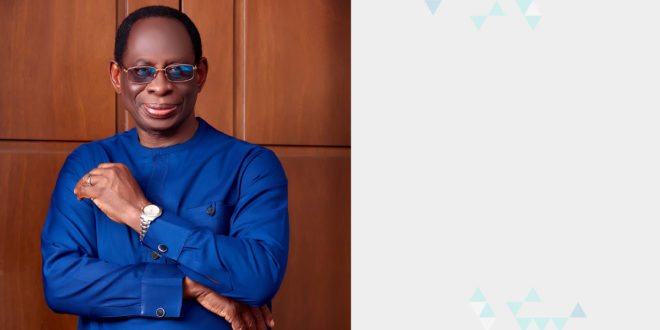 Dr. Kofi Konadu Apraku was born on September 7, 1954, at Akumadan in the Offinso District of the Ashanti region. His parents, Akwasi Apraku and Akua Boatema Brenya of blessed memory were both from Akumadan.

The son of a butcher, Dr. Kofi Konadu Apraku is not a definition of a child that was born with a silver spoon but he has successfully made it seem like it was the case. At birth, his father was a butcher in Akumadan and later transformed into a businessman mainly into trading and real estate development. On the other hand, his mother was illiterate.

The separation of his parents and the refusal of his father to send him to school did not deter the young Konadu Apraku, he rather engaged in cultivating a tomato farm from which he funded his education.

What could be termed as the turning point in the life of Dr. Kofi Konadu Apraku happened in 1971, while in Tweneboa Kodua Secondary School Form 4. As a form 4 student, he participated in the American Field Service International Essay Competition of which Successful candidates were to be selected to represent Ghana in various High Schools in the United State of America. Although he was unsure of his fate as he was a student from a rural community he took his chance.

Nearly a year after submitting his entry he was invited for an interview in Accra; this was his first time in the capital city of Accra. With the help of his brother, he managed to assemble a few decent clothes for the trip. After four weeks, he was notified of his success and his selection alongside some twelve other Ghanaian youth to participate in the exchange program that year. This meant he would spend a year in the United States at South Albany High School in Albany, Oregon.

In January 1980, he started a Ph.D. at Ohio State University and completed the degree in 1983. His professional life began in the same month after his Ph.D. when he got a job as an Assistant Professor of Economics and Finance at Rio Grande College in Ohio.

In 1984, he moved on to Wheeling University in West Virginia to work as an Assistant Professor of Economics and Finance. After 11 years he went on to work with the University Of North Carolina as a Tenured Professor of Economics in 1995. Just before he went on to the University of North Carolina, he assisted in the preparation leading to the first-ever all-race elections in South Africa as Team Leader of the United Nations Observer Mission to South Africa 1994.

Dr. Kofi Konadu Apraku between1995 and 1996 served as the Economics Affairs Officer and Head of the United Nations Economic Reconstruction Unit in Croatia.
Having continuously yearned to make his country; Ghana a better place, he heeded to the call to serve and contribute to its development. Dr. Kofi Konadu Apraku was first voted into parliament on 7 January 1997 to represent Offinso North Constituency. As a candidate under the New Patriotic Party. During his 12 years in parliament, he served in several positions including; Ranking Member, Parliamentary Select Committee for Finance, Member of the Parliamentary Select Committee for Communication. He also served as Shadow Minister of Finance and Economic Planning 1997 – 2001 under the presidency of John Agyekum Kuffour. During this time, he did a certificate course for Senior Managers in Government at the prestigious Harvard University- J.F. Kennedy School of Govt.

He later went on to African leadership in 2009 with his appointment as Chairman of the ECOWAS Independent Organ for Assessment of ECOWAS Structures.

When not at work Dr. Konadu Kofi Apraku is a Father and a husband who spends time contributing his quota to the development of the younger generation.

His Achievements Under Kufour

– HIPC : His strong presentation why Ghana must be declared a HIPC country in USA in 2002 with the aim of ensuring that Ghana won’t face a debt burden it cannot manage of which Ghana received $3.7 Billion in Debt Service Relief

– School Feeding Program: He lobied and introduced it under NEPAD initiative in 2005

– AGOA Visa: This entitles Ghana to export our products to USA with a duty-free and quata-free basis. This allowed Ghana enjoying access to the US market since 2000.

– Boankra Inland Port Project: He initiated in 2003 with all the necessary feasibility studies concluded. Actual construction works to bring the project to light was yet to start more than 15years after the commencement of the project.

Because of that, we can confidently say that he has good executive experience.

The NPP tradition is about the party’s ideological beliefs and antecedents. It has nothing to do with anyone’s entitlement in the party or position. If it’s about queue, then all the flagbearer aspirants should surrender to Dr Kofi Konadu Apraku.

I'm Adwenpa-Hene |Blogger & Broadcaster Journalist. I am the CEO and manager of this noble website. I publish on Entertainment, Sports, Politics, Lifestyle, and Technology. You can also follow Us on : YouTube Channel - My Ghana Media TV, Facebook - MyghanaMedia TV , Twitter - @MyGhanamedia2 & Instagram - My Ghana Media TV. Email Address: [email protected] Contact Us: 0200818719
@@MyGhanamedia2
Previous Farmer In Police Grips For Selling Daugther For An Amount Of GH¢20,000
Next OSP Begins Probe Into ‘Corrupt’ Vehicle Auctions By Customs