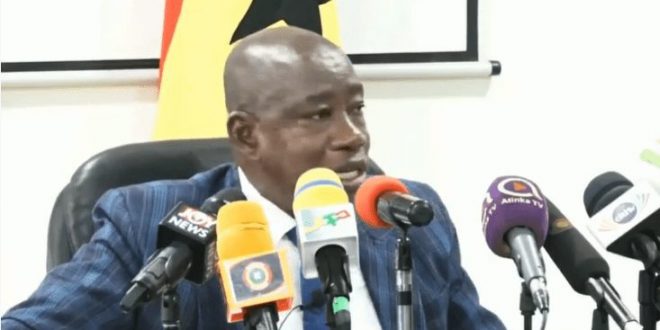 A teacher at Anomabo Anglican Basic School in the Central Region, David Forthgill Bentil, has petitioned the Director General of the Criminal Investigations Department (CID) of the Ghana Police Service to “arrest” and “prosecute” the regional Secretary of the New Patriotic Party (NPP) and two headteachers over alleged fraud with the Ghana School Feeding Programme (GSFP).

In his petition to the CID boss, COP Isaac Ken Yeboah, Mr Bentil accused Richard Takyi-Mensah and headteachers Ebo Afful of Ekurabadze M/A Basic School and Kofi Acquah of Tayido M/A Basic School of conniving to receive GH¢99,120 as payment for allegedly cooking for 472 pupils in the two schools.

“Upon my painstaking investigations, it is proven that both schools have never been on the Ghana School Feeding Programme (GSFP) since its inception,” Mr Bentil told the CID boss in his petition.

“I spoke to some teachers and pupils of both schools. I also spoke to some residents of Ekurabadze and Tayido who confirmed that, their wards have never enjoyed any kind of feeding programme since the School Feeding Programme was introduced. Several attempts made at getting the Headteachers of both schools to comment on the matter proved futile as each of them rather in a strange

manner, met me with aggression each time I tried to engage them on the matter.

“The conduct of the two Headteachers came to me as an indication of their likely complicity in the alleged fraud.”

The native of Egyaa is, therefore, petitioning the CID to “arrest, institute full scale investigations and prosecute where necessary, Mr. Richard Takyi-Mensah (NPP Central Regional Secretary), Mr. Ebo Afful (Headteacher of Ekurabadze M/A Basic School) and Mr. Kofi Acquah (Headteacher of Tayido M/A Basic School) for their roles in the alleged fraud which has cost the Nation and her poor taxpayers, a whopping Ninety-Nine Thousand, One Hundred and Twenty Ghana Cedis (Gh¢99,120.00)”.

“I am also calling for full scale investigations into the activities of all government officials and other persons mentioned in the newspaper report in a bid to help rid the system of avoidable corruption and the looting of the public purse.”

According to Mr Bentil, he was led to pry more into the issue after The Hawk newspaper exposed it in May.