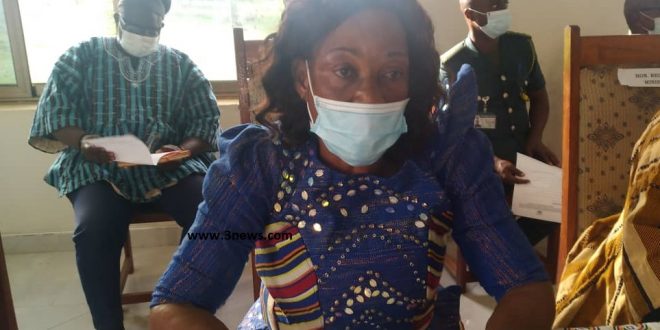 There was misunderstanding among members of the New Patriotic Party (NPP) after the president’s nominee for the Chief Executive position for Nabdam District Assembly, Agnes Anamoo, was rejected by the Assembly members.

She polled 12 out of 19 votes, representing 63.1 per cent and not enough to get her confirmed.

All nominees, as per the Local Government Act, have to get two-thirds majority in order to be approved.

Madam Agnes Anamoo became the first nominee to be rejected in the Upper East Region as Bolgatanga Municipal and Bolgatanga East assemblies confirmed their nominees by 100 percent on the first day of confirmation.

Agnes Anamoo is one of the district chief executives (DCEs) retained by President Nana Addo Dankwa Akufo-Addo in his list announced by the Local Government Minister, Dan Botwe, on Sunday, September 19.

She is also the only female DCE retained.

But some of the Assembly members decided not to give her the second chance.

See also  Alban Bagbin: I Can Remove Akufo-Addo From Office But He Can’t Remove Me

She will, however, have another chance to be confirmed within 10 days.

But confusion broke out among the members of the NPP immediately after the vote as they accused the regional chairman of the party, Anthony Namoo, who hails from the district, for influencing the government-appointed members of the Assembly from confirming the president’s nominee.

I'm Adwenpa-Hene |Blogger & Broadcaster Journalist. I am the CEO and manager of this noble website. I publish on Entertainment, Sports, Politics, Lifestyle, and Technology. You can also follow Us on : YouTube Channel - My Ghana Media TV, Facebook - MyghanaMedia TV , Twitter - @MyGhanamedia2 & Instagram - My Ghana Media TV. Email Address: [email protected] Contact Us: 0200818719
@@MyGhanamedia2
Previous You Can’t Stop Journalist Covering MMDCEs Approval –NMC
Next Kissi Agyebeng: Courts Do Not Look At The Truth But Evidence