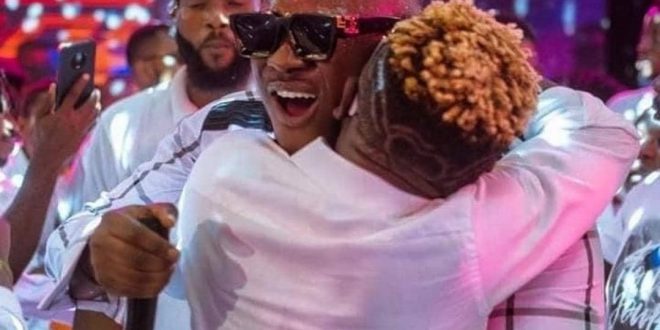 A Circuit Court in Accra has granted Charles Nii Armah Mensah, popularly known as Shatta Wale, and Samuel Frimpong also known as Medikal, permission to travel outside the country.

Lawyer, Jerry Avenorgbo, representing Shatta Wale and lawyer Pobbi Banson, appearing on behalf of Medikal, took turns before Judge Emmanuel Essandoh’s court, praying the court to grant their clients the opportunity to attend to some programmes outside the country during the festive season.

They further requested the court for a long adjournment in light of their request.

Judge Emmanuel Essandoh’s Court in granting the requests of the accused persons adjourned sittings to 25 January 2022.

See also  You Can Speak All The English You Want, But Do You Have The Numbers? – Gabby To Tsatsu

He pleaded not guilty for publication of false news and causing fear and panic when he first appeared in court last week.

Three others who appeared in court with him, Kojo Owusu Koranteng, Shatta’s personal assistant, Eric Vanetor, a graphic designer and Iddrisu Yussif, a beautician were also charged with abetment of criminal and were also admitted to GHC100, 000 bail each with one surety, who should be a public servant.

He also pleaded not guilty to a charge of displaying arms and ammunition. The accusation follows reports that Medikal brandished a pistol in footage published on Snapchat and later shared on other social media.

“After we publicly declared him and one other person wanted, the suspect, Shatta Wale, turned himself in today Tuesday 19 October 2021 at 8.59pm.

“He has been arrested to assist the police in investigations for his alleged involvement in the creation and circulation of information intended to cause fear and panic,” the statement from the police said.

“Preliminary investigations by the police reveal the widely reported gunshot attack on Shatta Wale Monday, 18 October 2021 was a hoax,” it added.

“No one will be spared if police investigations point to their possible criminal culpability in this matter. We want to caution any individual or group to desist from making false claims and engaging in acts, capable of disturbing the peace of the country because the law will come after you,” the statement said.