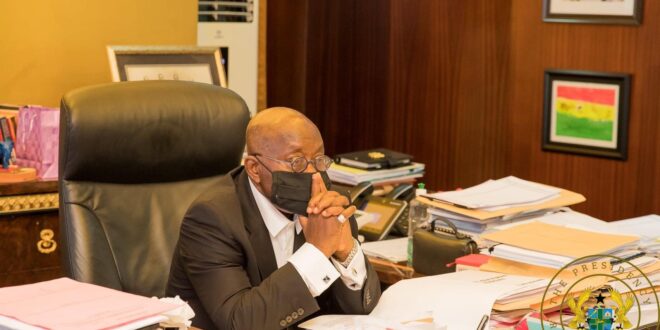 Do you want trouble for me? – Akufo-Addo Responds To Third Term ‘Possibility’

President Nana Addo Dankwa Akufo-Addo has reiterated his position of leaving office at the end of his current term in office, keeping with the two-term limit enshrined in the 1992 Constitution.

On the final day of his tour of the Ashanti Region, the president granted an interview to Kumasi-based Pure FM on which he discussed various topical local and international issues.

He continued: “Completely out of the question, seventh January 2025, goodbye Ghana, thank you and I wil probably end up in Kyebi and go and get my rest.”

On the matter of ECOWAS’ stance before the coup in Guinea when ousted President Alpha Conde was changing the Constitution to allow him to run for a third term, Akufo-Addo stressed that it might have been a mistake on the part of the bloc but same could not be a justification for military takeovers.

“So because ECOWAS did not act to stop the third term mandate of President Ouattara and Conde, we have no right to insist on the unconstitutionality of coups?

“I am not sure I understand that argument. Ok, it may be the failing of ECOWAS, but going forward is that the analysis that is going to help the growth of democracy in our region?

“The constitutive text of ECOWAS is about promoting good governance and democratic development in the ECOWAS space. That is the most important thing,” he stressed.

The president in an earlier interview on Ashh FM had made similar comments to the effect that ECOWAS in his personal opinion had to consider including bans on third terms as part of its constitutive text. He also issued a statement to that effect.