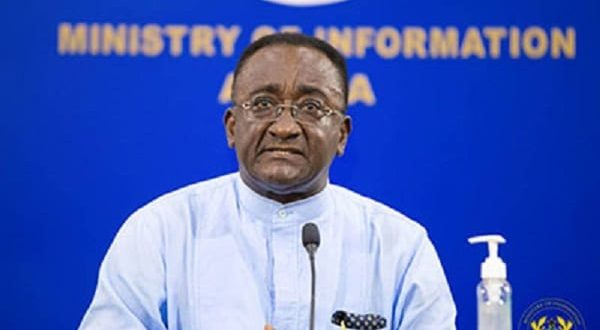 All evidence points to a conspiracy against Dr. Akoto’s candidature in the upcoming presidential primaries. The first instance was the uproar that greeted his meeting with party people in Kumasi.

Fabricated stories were circulated to pitch the Honorable Minister against the President and the government. It was further alleged that a payment of one million Ghana cedis was made to buy the delegates of Ashanti Region.

These malicious allegations caused so much fury within party circles and Dr. Akoto was compelled to issue a strong statement to debunk the allegations.

As if that is not enough, there are outrageous rumours making rounds on social media that the Honourable Minister has been reshuffled and replaced at the Ministry of Food and Agriculture. This is palpable lies and a figment of someone’s wild imagination.

Some people have undoubtedly made it a lifetime job to malign the Honourable Minister and create disaffection for him. The obsession about Hon. Dr. Owusu Afriyie Akoto, by his wicked detractors, who have now turned themselves into ‘Presidents and ministerial appointers’ is indeed mind boggling!

Well, I have bad news for those wishing ill for not only Hon. Dr. Owusu Afriyie Akoto but also for the country’s agricultural sector that the Honourable Minister is still at post and is focused on consolidating the massive successes and achievements chalked in the agric sector under the leadership of His Excellency, Nana Addo Dankwa Akufo Addo.

Indeed, over the past six months, the Honorable Minister of Agriculture has been embarking on his annual regional tours to monitor the globally acknowledged and very successful flagship programme, Planting for Food and Jobs.

On his last leg of these tours in the five Northern Regions on Sunday 7th December, 2021, he visited the Overlord of Dagbon, Ya-Na Abubakari II in the Gwewaa Palace where the Overlord was full of praises for the Akuffo Addo government for the implementation of various developmental policies and initiatives by the government, especially in the agricultural sector.

He said policies such as Planting for Food and Jobs (PFJ), Planting for Export and Rural Development (PERD), agricultural mechanization, green house agriculture, among others, had supported people in the agricultural value chain and, and therefore, entreated the government to ensure that those programmes were sustained. He was emphatic that his people have benefitted a lot from government’s policies and programmes, especially seed and fertilizer supply, which have seen massive improvement since government assumed power in 2017.

As the Minister’s stewardship of the Ministry and the success of the Planting for Food and jobs is receiving praises, both nationally and internationally, one would have expected the party to join in touting these successes to bring honor to the government. Unfortunately, some members are watering down these achievements by needlessly discrediting and leveling false accusations against the Minister for personal gain. He has been accused and vilified for things that he has not done while the real perpetrators of these imaginary crimes that are attributed to Dr. Akoto roam freely.

This is not fair. It is surprising that no one has complained about the rigorous campaign being undertaken by the vice president across the length and breadth of this country.

It will be recalled that just after Akuffo Addo was inaugurated for his second term, pictures of the vice president with the ‘break the eight’ slogan flooded social media and were posted in different parts of the country. No wrong was seen in this. At the regional conference of the North East Region, open declarations were made for the vice president in the presence of national executives. As you read this piece, the Bawumia campaign team has marshalled some regional ministers, district chief executives, regional and constituency executives who are campaigning across the length and breadth of this country.

The most dangerous aspect of their work is the use of intimidation and threats. Some appointees are campaigning under duress for fear of losing their jobs. It is surprising that nobody has come out to condemn this while it remains a public secret within party circles.

We are aware of their modus operandi but have chosen to ignore them. We are aware of the ‘moles’ they send to these meetings to record the minister. We have not had cause to worry about this tactic because the Minister’s engagements are genuine and not secret. It is not surprising that last audio they circulated earlier this week was at variance with the contents of the news article. We are sure all those who listened to audio were disappointed and surprised at the mischief. We are also aware of their grand scheme to constantly attack Dr. Akoto and we are not surprised. Why should we be surprised of these attacks when each of their own surveys is pointing to the growing popularity of the Dr. Akoto, especially in the Northern Regions of the country?

We want to conclude by stating that Dr. Akoto remains committed to Akuffo Addo’s administration and will continue to offer his best to the president as amply demonstrated by his handling of the Ministry and government flagship programmes in the ministry. He is also still committed to the welfare of the party and will continue to meet party people outside of his official hours on his trips when need be. We warn strongly against false publications and reports about Dr. Akoto and will take action against such recklessness in the future. Finally, we asking the friends of Dr. Akoto and his well-wishers to remain calm in these provocations.

I'm Adwenpa-Hene |Blogger & Broadcaster Journalist. I am the CEO and manager of this noble website. I publish on Entertainment, Sports, Politics, Lifestyle, and Technology. You can also follow Us on : YouTube Channel - My Ghana Media TV, Facebook - MyghanaMedia TV , Twitter - @MyGhanamedia2 & Instagram - My Ghana Media TV. Email Address: [email protected] Contact Us: 0200818719
@@MyGhanamedia2
Previous We Are Waiting for OSP – Atta Akyea’s Office Reacts To Petition To Probe Him
Next Akufo-Addo And Mahama Must Meet Over Crisis In Parliament – Kwame Pianim