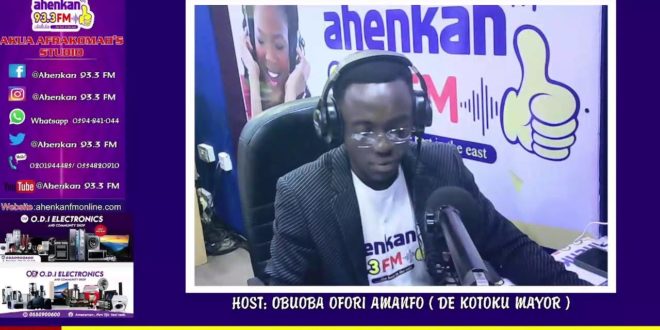 The Morning Show Host of Ahenkan FM and political critic, Obuoba Ofori Amanfo well known in the media field as “De Kotoku Mayor” has stated that the Vice president, Dr. Mahamadu Bawumia stands no chance in the 2024 General Elections.

According to him, Ghanaians will vote for anyone according to their track record of contributions to the nation which finds the Veep questionable.

He was of the view that the Vice President promised Ghanaians on many social and economic interventions which his government has been tagged to have failed.

The award winning host detailed that Dr. Bawumia is now being secretly frowned on by Ghanaians because of his controversial comments such as that of the economy which he promised to stabilize it by handling depreciation of the Cedi against the dollar.

“I will arrest the Dollar and give the keys to the IGP”, he said, which has taken another turn with the dollar rising up uncontrollably under his watch making Ghanaians experience great hardship.

He also related that, President Akuffo Addo’s administration which has been criticised greatly by the masses especially on many scandals as well as failed economic impacts also puts Dr. Bawumia under blame as his running mate.

He concluded that, the unfulfilled promises of Dr. Bawumia will be the scale on which he will be measured on competence for the decision to vote for him.

I'm Adwenpa-Hene |Blogger & Broadcaster Journalist. I am the CEO and manager of this noble website. I publish on Entertainment, Sports, Politics, Lifestyle, and Technology. You can also follow Us on : YouTube Channel - My Ghana Media TV, Facebook - MyghanaMedia TV , Twitter - @MyGhanamedia2 & Instagram - My Ghana Media TV. Email Address: [email protected] Contact Us: 0200818719
@@MyGhanamedia2
Previous Akufo-Addo Cuts Sod For Much Anticipated 4-tier Suame Interchange In Kumasi [video]
Next ‘I Will Shame You All’ – Akufo-Addo Tells Detractors In Ashanti Region