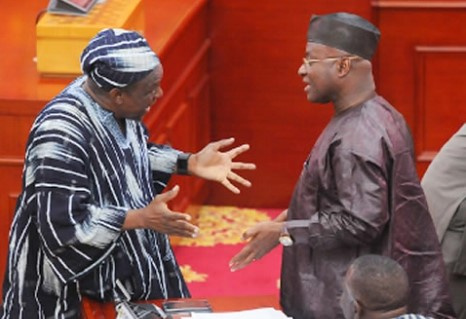 The Majority Leader in Parliament, Osei Kyei-Mensah-Bonsu has revealed that the Speaker of Parliament, Alban Bagbin is not responding to calls and messages after absenting himself from Parliament on Monday, December 20, 2021.

The Speaker was nowhere to be found as Parliament had intended to vote for the passage of the controversial E-levy bill.

Speaking to JoyNews, the Majority Leader disclosed that all efforts to get to the Speaker has proven futile.

“I called him a couple of times, but I couldn’t reach him and I sent a message including WhatsApp messages but I have not had any response,” Osei Kyei-Mensah Bonsu stated.

However, the Majority believe that the move from Alban Bagbin is an attempt to reduce the 138 Majority as the First Deputy Speaker, Joseph Osei Owusu [Joe Wise], will have to so

Joe Wise vacated his chair for Second Deputy Speaker to take over in order to vote but the minority disagreed and charged unto the speaker’s podium to seize his chair.