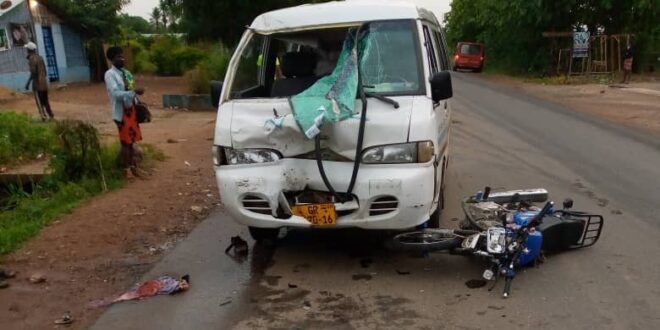 Two persons on a motorbike have died after crashing with Hyundai H-100 minibus crashed on Kpong to Akosombo Highway.

The Hyundai H-100 mini bus with registration number GR 4670-16 with eight (8) passengers onboard from Akosombo towards Accra but on reaching  Energy Plus Fuel Filling Station at Ayibom stretch of the road, an unregistered motorbike with two persons onboard speeding from the opposite direction veered off its lane and crashed into the vehicle.

That Police Personnel “continued to the VRA hospital where bodies of the deceased rider and pillion rider with rasta hair and wearing jeans and black dress were found lying at the morgue” the report said.

Preliminary investigation by Police indicates, at about 3:30pm the same day, the suspect driver Nyidawu Seyram 42y, in charge of the Hyundai minibus with eight persons on board was traveling from Akosombo towards Accra.

However, on reaching a section of the road in front of Energy Plus Fuel Filling Station at Ayibom two unknown persons on an unregistered Royal motorcycle approaching from the opposite direction veered off course into the lane of the Hyundai minibus and crashed into it.

Both the rider and the pillion rider sustained various degrees of injuries and were rushed to the VRA hospital, Akosombo for medical treatment but were pronounced dead shortly on arrival.

The suspect driver has been arrested and detained for investigation

Motorbike accidents have become rampant in the Eastern Region, according to Eastern Regional Motor Transport and Traffic Department (MTTD).

The Eastern Regional Commander of the MTTD of the Ghana Police Service, Chief Superintendent Stephen Ahiatafu has revealed that motorbikes (Okada) and tricycle (Pragia) killed 20 out of 60 people who died on roads in the region from January to February 13, 2021.

Disclaimer: MyGhanaMedia is not responsible for this report and its content.There are four types of content published on MyGhanaMedia daily: curated content; syndicated content; user-generated content; and original content.
Send your news stories to [email protected] and Chat with us via WhatsApp on +233 200818719
2021-04-12
Adwenpa-Hene