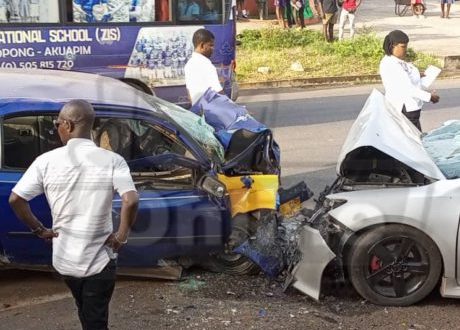 Eastern region: 3 School Children Die In Accident, others in critical condition At Akuapem-Mampong

Three school children have been confirmed dead in an accident at Akuapem-Mampong in the Eastern region on Tuesday.

They were among twelve school children in a Nissan Almera taxi with registration number GS 5736-09 driven by one Erasmus Atiemo from Mampong to Mamfe.

Their vehicle collided head-on with an unregistered Toyota Camry with a trade plate number DV 11852-21 driven by 34-year-old Henry Boahen.

The driver of the Toyota Camry, who was driving from the Akropong direction was said to have wrongly overtaken another vehicle ahead of him resulting in the accident.

Both drivers and a number of the school children sustained severe injuries and were rushed to the Tetteh Quarshie Memorial Hospital in Mampong where they are receiving treatment.

Two of the children, according to DSP Ebenezer Tetteh, the Eastern regional PRO of the Ghana Police Service are in critical condition at the Ridge and Korle Bu teaching hospitals in Accra.

Mr. Tetteh says the two drivers will assist the Police to unravel the circumstances that led to the accident.

I'm Adwenpa-Hene |Blogger & Broadcaster Journalist. I am the CEO and manager of this noble website. I publish on Entertainment, Sports, Politics, Lifestyle, and Technology. You can also follow Us on : YouTube Channel - My Ghana Media TV, Facebook - MyghanaMedia TV , Twitter - @MyGhanamedia2 & Instagram - My Ghana Media TV. Email Address: [email protected] Contact Us: 0200818719
@@MyGhanamedia2
Previous President Akufo-Addo: “I Will Respect Two-term Limit; Won’t Impede Free, Fair Polls Nor Change Constitution”
Next Carlos Ahenkorah: ‘E-levy Is Not Compulsory; If You Don’t Want To Pay, Don’t Do ‘MoMo’