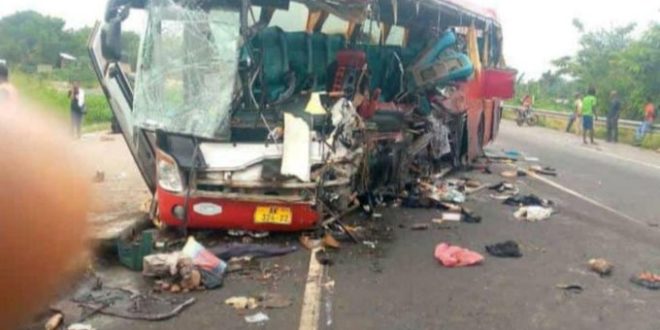 Spread the love
Nine passengers believed to be students of the University of Education, Winneba (UEW) have died in an accident that occurred Sunday dawn at Asuboi in the Eastern Region.

The accident involved a Hyundai universe commercial bus with registration number AK 324-22 and a 40-footer container loaded with wood.

The bus is said to be transporting the students from Sunyani towards Accra but on reaching a section of the Asuboi road, the driver failed to observe traffic ahead, He was alleged to be sleeping.

He crashed into the 40-footer container loaded with woods which had fallen partially on the road after a previous accident.

See also  Another Load Shedding Timetable To Be Released

Eight passengers died on the spot, and one later died at the Suhum Government Hospital, where the injured were rushed to.

The Public Relations Officer of Eastern Regional Police Command, DSP Ebenezer Tetteh, says the police are making effort to remove the accident vehicles from the road.

There is a fatal accident at Asuboi, near Suhum on the Accra-Kumasi Highway (N6), involving a Universe commercial bus and a stationary 40-footer-container loaded with wood in which 9 passengers have died and leading to the closure of the road. pic.twitter.com/ubU0ukbFZw

remove the vehicle from the road to pave way for traffic flow.

Meanwhile, all motorists approaching are advised to be cautious.

Further update will be communicated in due course. pic.twitter.com/vV1hF9gZix

remove the vehicle from the road to pave way for traffic flow.

Meanwhile, all motorists approaching are advised to be cautious.

Further update will be communicated in due course. pic.twitter.com/vV1hF9gZix

There has been a tragic accident at Asuboi ( a town on the Accra – Kumasi highway) in the the Eastern Region this dawn involving an organized bus of students from Sunyani to Winneba.
😭😭😭😭😭😭😭😭 pic.twitter.com/FswKDoGpl5

Too bad . Accra – Kumasi highway must be fixed🥺 Several injured as VIP bus colides with a 40-footer container carrying woods. Unconfirmed reports suggest some students from UEW were involved in the accident 🙃
pic.twitter.com/c98M4drMTd

Tags Fatal Accident students of the University of Education

I'm Adwenpa-Hene |Blogger & Broadcaster Journalist. I am the CEO and manager of this noble website. I publish on Entertainment, Sports, Politics, Lifestyle, and Technology. You can also follow Us on : YouTube Channel - My Ghana Media TV, Facebook - MyghanaMedia TV , Twitter - @MyGhanamedia2 & Instagram - My Ghana Media TV. Email Address: [email protected] Contact Us: 0200818719
@@MyGhanamedia2
Previous Black Sherif Is Still With Us – Road Boys Association.
Next Asiedu Nketia Runs From Campaign Posters