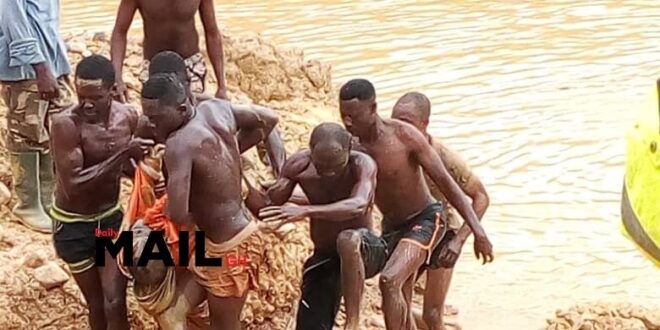 At least three illegal miners are feared dead after an underground mining pit caved in on them at Akyem Twepiase near Kyebi in the Eastern region.

The exact number of victims trapped has not been established but sources say at least three persons were in the pit when it collapsed.

One of the victims has been retrieved dead and deposited at the Kyebi government hospital morgue by a joint rescue team of police and residents.

A resident in the community said, the victims were young labourers from Northern Ghana hired by the owners of the illegal mining site who are from the community to work for them.

“They were doing down blow which is underground mining. This particular one is about twice of two high tension poles deep. So because it rained the whole day yesterday so it caved on them. It is not clear the number of people trapped. So far one person has been retrieved. All the owners of the site have runaway. The victims are not Akyems they are northerners hired to work in the pit “.

The Akyem Abuakwa area is one of the areas in Ghana affected by the scourge of illegal mining.

The activities of the illegal miners continue to degrade the environment and pollute river bodies.

Efforts are underway to rescue the victims.

Earlier this week, a Police officer at Sefwi Amoaya in the Sefwi Bodi District of the Western North Region who was part of a Police team on anti-Illegal Mining Operation duty around the River Sui got drowned.

“Whilst investigations continue, the Police Administration wishes to express its deepest condolences to the bereaved family, colleagues and the Service as a whole,” a Police statements said.