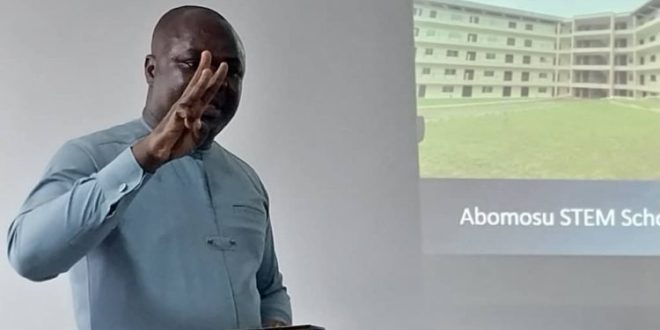 The Eastern Regional Communication Directorate of the ruling New Patriotic Party (NPP) has showcased the projects which the current government has invested massively in.

President Akufo-Addo over the weekend ended a three day tour of the Region to inspect and commission some projects in the region.

The Regional Communications Director, Evans Osei Yeboah who addressed a presser on Monday at the New Juaben South Constituency Office outlined the account of the many infrastructure projects that the government has executed in the region.

Osei Yeboah explained that the account is limited to projects executed in the area of Education, Factories, Health, Sports and Roads between 2017 and 2021.

He explained that from “the official records we can boast of 305 infrastructure projects in various Senior High Schools; 33 initiated 1D1F factories and 17 completed and operational in the region; 17 new hospitals/health facilities ongoing in the region; and 2 multi-purpose mini stadia and 13 AstroTurf pitches, 1,487.62Km of roads constructions. We, in the Eastern region, are indeed proud of his sterling performance”.
“Even though we recognize the difficulties in the economic space and the hardships it is posing to Ghanaians, as well as the global crisis (for example, Moody’s became the third of the big three raters, alongside Fitch and S&P, to revise down the UK’s borrowing outlook from “stable” to “negative”) that has hit major economies in the past months, we strongly believe that with the kind of determination and focus the President is leading, we can overcome these challenges”.

On Education, he said the government has undertaken hundreds of infrastructure projects encompassing classroom blocks, dormitory blocs, ICT facilities etc at all levels (Basic, Senior High and Tertiary) across the region.

Below is the breakdown of the projects;

At the Basic Level, the government has constructed a total of 127 projects made up of 41 KG blocks, 12 3-unit Classroom blocks. 51 6-unit classroom blocks, 22 toilet facilities and 1 rehabilitation work.

Under the Kuwait Funded Projects; a total of 5 projects have been executed in the Eastern Region. They include 1 12-unit classroom block and 4 single storey dormitory blocks.

The government is keenly interested in promoting STEM education in the region. The government is constructing 9 new STEM Senior High Schools across the country. Eastern region is blessed to have 1 built in Abomosu in the Atiwa West District. This STEM school has ultramodern facilities like Administration Block, 2No. Science Block, 2-Storey Dormitory Block, 3-Storey Dormitory Block and Library Block, Sick Bay etc.

Construction of Science, Technology, Engineering, Arts and Mathematics Education (STEAM); Centers at Koforidua Secondary Technical School and Abuakwa Senior High School out of the 20 the government earmarked across the 16 regions.

Enhance and Upgrading of Technical And Vocational Education and Training Centers in Ghana (VACE): Kibi Senior High School is part of the 10 SHS that were selected to benefit from this program. Projects executed in the school under this program include Computer building, Electrical and Electronic Workshop Building, Rehabilitation of Building Construction, Basic Mechanical Workshop Building etc.

Establishment of TVET Centers of Excellence:

In the bid to revitalize the TVET sector, the region has benefited from the construction of one of the state of the art TVET center for excellence in Anyinam in the Atiwa East district out of the 20 the government is undertaking across the country. The Center has Food Processing – Fruit and Vegetable Line; Electrical Installations; Garment and Tailoring; Woodworking; Information Communication Technology (ICT) – Coding and programming.

This year in May 2022, President Akufo-Addo cut the sod for the construction of the University of Engineering and Agricultural Sciences (UEAS), in Bunso, in the Eastern Region. The $90 million project when completed which will focus on satisfying human resource demands from domestic industries.

However, this account is limited to completed ones listed below;

• Kwahu Roots and Fruit Limited; Production and Processing of Ginger. Located in Nkawkaw.

Under the industrialization drive, government has invested heavily into the construction of Business Resource Centers (BRC) across the region and millions of Ghana cedis capital injection into small and medium scale enterprises development. We will be focusing on these areas in our subsequent press conferences to share the details of these initiatives.

The Eastern Regional Hospital: phase I of the construction of a two hundred and eighty-five (285) bed facility, out of the total capacity of six hundred (600) beds is under construction and steadily progressing. Once fully completed, it will be fitted with the requisite teaching and learning facilities. Phase 1 is expected to be completed very soon and commission.

In April, 2020, Parliament approved a loan facility of 79 million Euros for the construction of some Eleven (11) 40-bed hospitals and 1 Polyclinics. Out of the 11 hospitals, Eastern region had 5 that are being constructed at Jumapo, Kwabeng, Nkwatia, Adukrom, and Achiase.

On the almighty Agenda 111; Under this government’s flagship program, the beneficiary districts in Eastern region are:

Construction of a Trauma Hospital at Anyinam in the Atiwa East also ongoing, Retooling and re-equipping of the Kwahu-Atibie Hospital, part of a €40 million contract award to Messrs Contracta Construzion Italia S.R.L. for the retooling and equipping of four selected health facilities in the Eastern Region.

Drone Medical Delivery Infrastructure; the first drone center for distribution of essential medical supplies was built in the Suhum municipality. Indeed, we remember the propaganda by the empty opposition that the drones will be used as a spy weapon to take pictures of women in their bathhouse. Today, is a reality and the best in Africa and the world at large.

It is instructive to make the point that, the investment of Nana Akufo-Addo’s government alone in the health infrastructure of the Eastern region surpasses what the NDC has done in their entire 8 years in power throughout the country. The records are clear and not in green books.

Now to Sports development. It is also worth making the point that, before we took over the reigns of government in January 2017, the number of Astroturf in the entire country is only two (2). However, through the hard work of the President and his appointees this country has about 120 AstroTurf dotted around the country, the Eastern region is not left out.

In the Eastern Region, the following sports infrastructure projects are being executed to promote sporting activities and youth development:

Koforidua Multi-Purpose Youth Development Center. This is part of the 10 Multipurpose Youth Resource Centers being constructed across the country. Phase one (1) components of the project include:

The phase two include:Road networks to the centers, the inner and outer perimeters and accessibility for Persons with Disabilities.

The following communities and districts have benefitted from the Astroturf projects. It is the government’s intention that at least each constituency should have 1 standard pitch.

The Eastern Region is not left out on its share of road constructions.