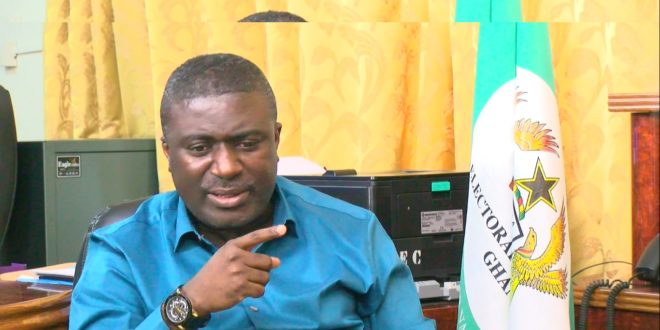 The Electoral Commission (EC) has clarified the new Constitutional Instrument (CI) on proof of citizenship for purposes of electoral registration.

According to Deputy Chairman of the Electoral Commission in charge of Corporate Services, Dr. Bossman Asare, the CI in which the Ghana Card is listed as the only proof of citizenship for purposes of electoral registration will target only persons turning 18 years, and those who could not register in the last exercise.

He said the exercise will deal with deception associated with voter registration, adding it will be a continuous registration.

Per the new C.I, which would become law after 21 sitting days of Parliament, the EC is seeking to make the Ghana Card the sole form of identification for eligible voters who want to get onto the electoral roll.

The C.I has been referred to the Subsidiary Legislation Committee of Parliament. By convention, the committee is chaired by a member of the Minority group.

Orders, rules or regulations made pursuant to provisions of the Constitution or an Act of Parliament must be laid before Parliament for 21 sitting days before they come into force.

Any such subsidiary legislation so laid are referred to the committee to determine whether it is in accordance with the general objectives of the constitution or the Act pursuant to which it is being made.

It also determines whether the legislation contains any matter, which in the opinion of the committee should be dealt with in an Act of Parliament; directly or indirectly bars the jurisdiction of the courts; gives retrospective effect to any provision contrary to provisions of the Constitution or an existing Act; involves expenditure from the Consolidated Fund or has a form or structure which calls for further elucidation, among other things.

Even before the EC had laid the new C.I before Parliament, the opposition National Democratic Congress (NDC) has accused the commission of planning to compile a new voter’s register for the 2024 general election, with the Ghana Card as the only source document.

The Minority Leader in Parliament, Haruna Iddrisu, said any move by the EC to compile a new voter’s register with the Ghana Card solely as the mode of identification would not bode well for the country, especially when the EC had already expended huge sums of money to compile a new register which was used for the 2020 general election.

The EC debunked the assertion by the NDC and said the new C.I was only meant to regulate continuous registration, with the Ghana Card as the source document.

“We are not compiling a new voter’s register. The one we compiled in 2020 is a credible one, a very good register so we are not dispensing it,” the Director of Electoral Services of the EC, Dr Serebour Quaicoe, told the media.

Meanwhile, in Parliament, the new C.I laid by the EC caused heated debates, with the Minority calling for the EC to come and explain the rationale for the use of the Ghana Card as the only source document.

At Parliament’s sitting on July 21, 2020 the First Deputy Minority Chief Whip, Ibrahim Ahmed, said it was necessary for the EC to brief the House on the new C.I. to erase any “controversial issue of mistrust.”

For his part, the Majority Leader, Osei Kyei-Mensah-Bonsu, rejected the call by the Minority, describing it as premature, adding that the next general election was not yet due.