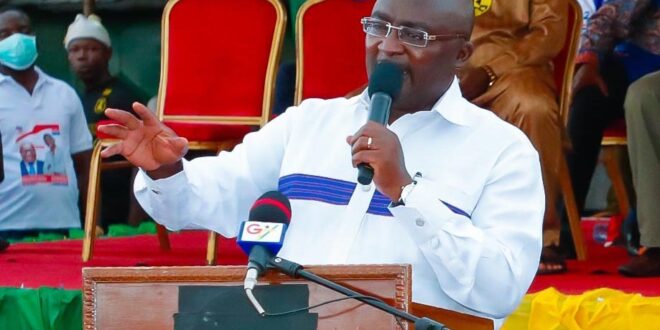 Vice President Dr Mahamudu Bawumia has urged African countries and all banks on the continent to embrace digital technology in order to take advantage from the enormous benefits therein.

Speaking during the 25th National Banking conference on the theme “the digital economy of Ghana the strategic role of the banking industry” on Thursday  November 18, he said “Countries under the free trade area in Africa must embrace all the opportunities brought by digitalization. This will alleviate the poverty levels within the region.

“Banks will benefit from a larger market  share. Cross border trading financing arrangement under the AfCFTA can increase the profitability of the banks, expand their asset base.”

For her part, President of the Ghana Bankers Association, Madam Patricia Sappor revealed that the value of mobile money transactions for the first four months of this year totaled ¢301.1billion whiles that of cheque transaction over the same period amounted to ¢68.3bn.

She indicated that if this trend persists, the total value of mobile money transactions will surpass cheque transactions by far more than 389bn  recorded for the whole year of 2020.

She said “The value of mobile money transactions for the first four months of this year totaled 301.1billion whiles that of cheque transaction over the same period amounted to 68.3bn.

“If the trend continues which I believe will, the total value of mobile money transactions will surpass cheque transactions by far more than 389bn  recorded for the whole year of 2020.

Her comments come at a time the government has inr6duced tax on mobile money transaction in the bduegt statement for he 2022 fiscal year.

I'm Adwenpa-Hene |Blogger & Broadcaster Journalist. I am the CEO and manager of this noble website. I publish on Entertainment, Sports, Politics, Lifestyle, and Technology. You can also follow Us on : YouTube Channel - My Ghana Media TV, Facebook - MyghanaMedia TV , Twitter - @MyGhanamedia2 & Instagram - My Ghana Media TV. Email Address: [email protected] Contact Us: 0200818719
@@MyGhanamedia2
Previous Toll Booth Workers Chase Gov’t Over 3 Months Unpaid Salary
Next Audio: ‘If You Have More Than ¢100 To send In A Day, Then You Are Not Poor’ – Ursula Ekuful