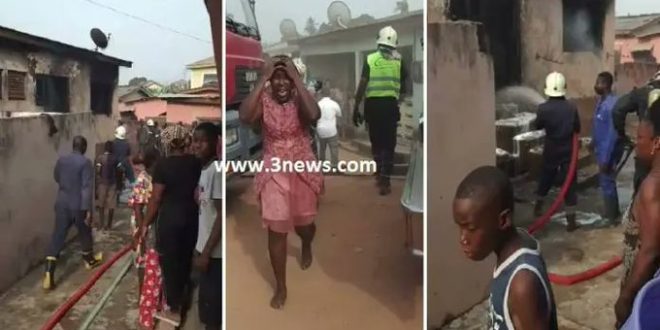 A family of four has been killed in a fire outbreak that engulfed a rented apartment at Effia in the Effia-Kwesimintsim Municipality of the Western Region n Tuesday.

Three other tenants of the same apartment sustained various degrees of injury and have been admitted to the hospital, receiving treatment.

They were however unclear what might have caused it.

According to the landlord, he woke up to shouts and screams of tenants crying for help.

He quickly rushed to the scene and realized billows of smoke coming out from one of the rooms.

“I was in my room when I heard the noise of an exploded gas cylinder. I came out and saw smoke all over, other tenants came around and we tried to rescue those who were trapped in the rooms. We were able to save some of them through the window but one woman and her daughter were still in their room. We could not save them on time,” he said.

Personnel from the Ghana National Fire Service was later called to the scene to save the situation.

Some eyewitnesses indicated that the personnel arrived at the scene late after several calls were placed.

“When the fire started, we called the [Ghana National] Fire Service but no one was responding. They arrived at the scene late. We tried our best to save a woman who was lying in one of the rooms but all efforts proved unsuccessful,” Irene Abban, an eye witness, indicated.

The Effia-Kwesimintsim Municipal Director for the National Disaster Management Organization (NADMO), Henry Kwofie, has confirmed that four persons have so far died with others receiving treatment at the hospital.

“The deceased persons include a mother, father, their daughter, and a grandchild. The daughter who is a nurse had visited her mother with her child after work when the fire outbreak occurred. They were trapped in the bedroom and could not be saved.

“We initially saved the husband but he also died later at the hospital,” Mr. Kwofie said.

I'm Adwenpa-Hene |Blogger & Broadcaster Journalist. I am the CEO and manager of this noble website. I publish on Entertainment, Sports, Politics, Lifestyle, and Technology. You can also follow Us on : YouTube Channel - My Ghana Media TV, Facebook - MyghanaMedia TV , Twitter - @MyGhanamedia2 & Instagram - My Ghana Media TV. Email Address: [email protected] Contact Us: 0200818719
@@MyGhanamedia2
Previous Buaben Asamoa: Gov’t Has Built Over 1,000 Educational Infrastructure, Handed Over 538 Of Them
Next Akatsi North District Assembly Finally Gets DCE