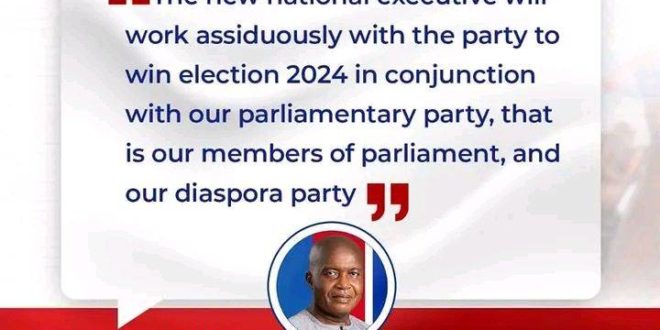 Newly elected National Chairman of the New Patriotic Party (NPP) Stephen Ayesu Ntim has assured the rank and file of the party that he and his fellow new executives will join forces with the party’s Members of Parliament to deliver victory in 2024.

Mr Ntim, who staged a fifth attempt to be Chairman of the NPP, beat six other contenders to be elected National Chairman.

He started the quest to occupy this position two decades ago but lost to Peter Mac Manu, late Jake Obetsebi Lamptey, Paul Awentami Afoko and Freddie Blay on the past occasions.

With 4,014 votes polled on Saturday, Mr Ntim, who is the board chairman of the Lands Commission, witnessed a fulfilment of a decades-long dream.

He promised to ensure that the party wins power in 2024, a desire that has been coined into the mantra ‘Breaking the 8’.

“The new National Executive [Committee] will work assiduously for the party to win election 2024 in conjunction with our Parliamentary party, i.e our Members of Parliament and our Diasporan party, our members in the foreign countries,” he told the delegates in his victory speech.

He further expressed gratitude to his supporters and, indeed, all party supporters for giving him a treasure to cherish on his 64th birthday.

“I will value the chairmanship position and I will make sure that it will be a unique position that will remain enviable for anybody in the party to aspire at.”