Breaking News
Home / COMMUNITY WATCH / Five Year Of $1 Million Per Constituency: Ada Only Has An Ambulance And Two Unfinished Projects To Show 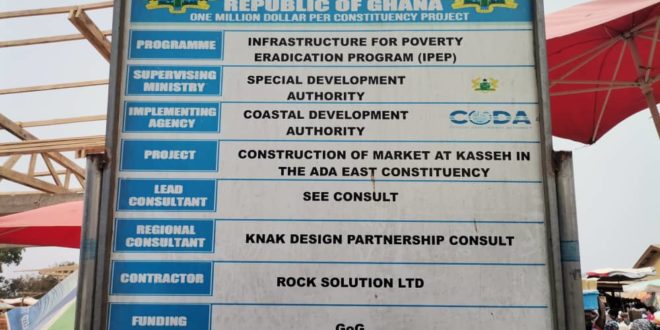 Five Year Of $1 Million Per Constituency: Ada Only Has An Ambulance And Two Unfinished Projects To Show

The District should have benefited from at least $4 million worth of projects by close of 2021.

The point has been made time and again to the effect that Ghanaian political parties and governments are much more interested in coining beautiful and catchy slogans to win political favours without making conscious efforts to fulfill those promises to the citizenry. Therefore, one of the surest ways of ensuring that governments fulfill their promises to the people is by having citizens follow up on the progress of work with constant reminders.

It is expected to bridge the information gap between citizens and their governments to build trust and sustain development. The reporter resorted to the use of the RTI law to follow up on projects in the Ada-East district under the government’s flagship program of $1 million per constituency.

The purpose is to test the district assembly’s response to the RTI Act and to report the stages of development of such projects to the citizens. It is also to foster a culture of transparency and accountability in public affairs. 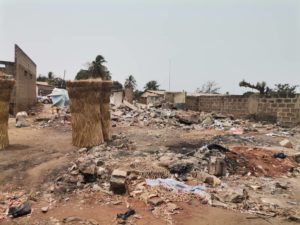 From campaign pledges and manifesto commitments to government policy:

During the 2016 electioneering campaign of the current governing New Patriotic Party,the current President, Nana Addo Danquah Akuffo-Addo, and the NPP party manifesto on page 21, promised to set up an Infrastructure for Poverty Eradication Programme (IPEP) under which every constituency in the country will be allocated the equivalent of $1 million annually to finance capital expenditure on upgrading and improving infrastructure and/or on developing new facilities, especially in rural and deprived communities. 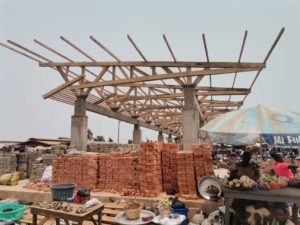 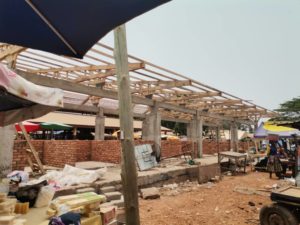 After winning the 2016 general election,the government set up the IPEP policy under which each of the 275 constituencies across the country is to be allocated the equivalence of US $1 million annually to invest in infrastructure development initiatives of their choice. 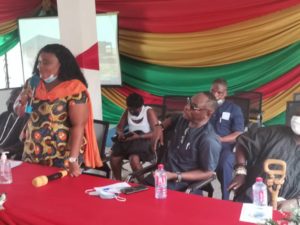 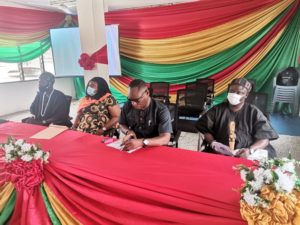 Therefore, the government issued commencement letters to cover the full amount of cedi equivalence of $1million to all three development authorities to commence the implementation of constituency-specific infrastructure needs. The Minister of Finance and Economic Planning (MoFEP) later granted the letters of commencement to the three development authorities in the country to commence full implementation of the $1 million per constituency pledge under IPEP. 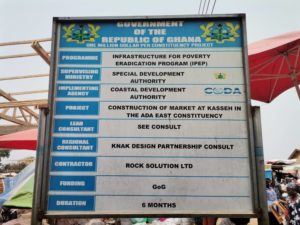 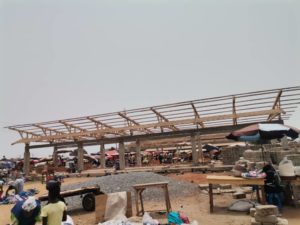 According to the Awutu Senya East legislator,her constituency has benefited from the fund with over seven projects initiated under various projects. Of these she said,are ultramodern toilet facilities, a clinic, Ofaakor durbar grounds,drainage systems in some parts of Kasoa and others.Also, the Ghana News Agency on September 7, 2021, reported that “109 municipalities and districts have benefited from the $1 million constituency initiative. The news agency reported that the Middle Belt Development Authority (MBDA) has executed health, education, and other infrastructure development projects in 109 municipalities and districts under the government’s $1 million for each constituency initiative.

According to Mr. Joe Danquah, the Chief Executive Officer of the Authority, some of the projects from the monitory allocation included modern markets and Astro-turfs spread over the five regions of Ashanti, Bono East, Bono, Ahafo, and Eastern Region.

On June 1st, 2020, myjoyonline.com reported that the National Democratic Congress (NDC) has described the President’s one-million-dollar per constituency promise as a scam.

Alhaji Mohammed Mubarak Muntaka, the Minority Chief Whip, expressed shock over the government’s claim of allocating $1 million per constituency per year to the 275 constituencies.

He said after President Nana Addo Dankwa Akufo-Addo and his New Patriotic Party (NPP) assumed office for nearly four years, and despite getting the most resources in the history of Ghana, the NPP has very little to show for its flagship promise of one million dollars annually per constituency.

According to him, the government has only a few toilets, warehouses, markets, mechaniszed water systems, ambulances, and sub-standard dugouts to show as achievements in the country.

Hon. Munkaka said, “It is instructive to note that per the $1 million every year per constituency promise of President Akufo-Addo, each constituency should have received a total of $3 million, which leads to a total of $825 million by now (excluding that of the year 2020), or benefitted from development projects equivalent to that amount by now.”

He stated that per the Ministry of Special Development Initiatives’ own data submitted to Parliament in the 2020 Budget Statement, the total cost of capital expenditure projects undertaken so far under the $1 million per constituency promise from 2017–2019 is a paltry GHC 462,979,103, equivalent to just $81 million.

At a Town Hall Meeting organized by the Ada-East District Assembly in collaboration with the Media Foundation for West Africa (MFUA) on December 9th, 2021, in Ada-Foah, the District Chief Executive (DCE), Ms. Sarah Dugbakie Pobee, disclosed that the cost of the ambulance provided by the Ministry of Health to the district was from the constituency’s allocated one million dollars for development. The DCE, however, did not disclose how much of the $1 million went into the acquisition of the ambulance. She also mentioned that the Coastal Development Authority is helping to construct market stalls in the Kasseh Market, Ada, before stating that part of the district’s $1 million is being used to construct the market.

The reporter, under the RTI Act requested the Ada-East District Assembly to furnish him with information on how much of the $1million has been allocated to the district, the names, locations and cost of all projects under the $1million IPEP programme.

Some Assembly officials the reporter interacted with also have no idea of the Information Officer portfolio. Different officials of the assembly gave conflicting directive to the reporter seeking information under the RTI.

In another RTI request to the Ministry of Finance and Economic Planning (MoFEP), requesting for information on the amount of money released by the ministry to the Ada-East Assembly so far from the IPEP $1million programme, the ministry could not furnish the reporters with the information.

The Ministry, however, in accordance with section 20 (1) (a-c) directed the reporters to seek the information from the Special Development Initiative Secretariat. A request forwarded to the special development authority in this regard is yet to be responded to. A first visit to the Kasseh market, one of the project sites reported by the DCE, by the reporter indicates that work on the market sheds has halted, and some market women were seen sitting in the scotching sun with their wares.

Some of the market women the reporters spoke to said the contractor had not visited the site for about a year. They also complained that the project has limited the market space since a portion of the market has been cordoned off for the project.

They say this has placed some financial burdens on them since they always need to rent big umbrellas and canopies on market days. They pleaded with the assembly to ask the contractor to return to work.

The project was estimated to accommodate 50 market women and a creche. The Facebook post also indicated the cost of the project to be GHC 2 million, with the funding source being the Government of Ghana IPEP $1 million per constituency programme.

Surprisingly, on the website of the coastal development authority, the implementation agency for the ministry of special initiatives, where all the IPEP projects under $1 million per constituency were reported, there was no single project reported from the Ada constituency/Ada-East district.

The reporter has tried to no avail to reach Mr. Tetteh Glover, the contractor for the market shed project. At another Town Hall Meeting held by the Ada-East Assembly on March 16, 2022, at Big-Ada, the DCE was directly questioned on how much the district has received so far for IPEP projects, the list of the projects, and the cost of each project.

She responded that the constituency/district has benefited from an ambulance, ongoing 40 lockable stalls, and 40 sheds at Kasseh market with auxiliaries. She added a CHIPS compound at Kaja Sega and a boys’ dormitory at Ada Senior High School and made it clear that until these projects are completed, she cannot ask for anything under the IPEP programme.

Ada East MCE Answering Questions On $1 Million Per Constituency At The Ada Community Center
She also went on to publicly state that she had no idea of the cost of each project since the district is not in charge of awarding such contracts. Meanwhile, a search by the reporter at the various project sites mentioned revealed that there is no construction of a boys dormitory going on at Ada Senior High School, nor is there construction of a CHIPS compound at Kaja Sega. A second visit to Kasseh market showed what looks like a foundation for some lockable stalls, in addition to the uncompleted construction of market sheds seen during the first visit.

There is no sign of the construction of a creche or pavement as mentioned by the DCE. The Ada constituency /Ada-East District therefore has only an ambulance and two uncompleted projects (market shed and stalls) to show for the five years of the implementation of IPEP’s $1 million per constituency programme.

The RTI Act is a law enacted by the Parliament of Ghana in 2019 after over two decades of it being introduced in parliament. It is an Act that allows the public (citizens and non-citizens of Ghana) to access certain kinds of information. It also serves as a procedural document that guides information disclosure to information seekers and public officials on how to request or give information.

This particular act has its foundation grounded in the fundamental human right recognised in various legal documents including: Article 19 of the Universal Declaration of Human Rights; Article 9 of the African Charter on Human and People’s rights and Article 21 of the 1992 Constitution of Ghana. The act is relevant to democracy and good governance to help in the process of information disclosure, transparency in development processes, accountability in governance, and efficient utilisation of public resources.