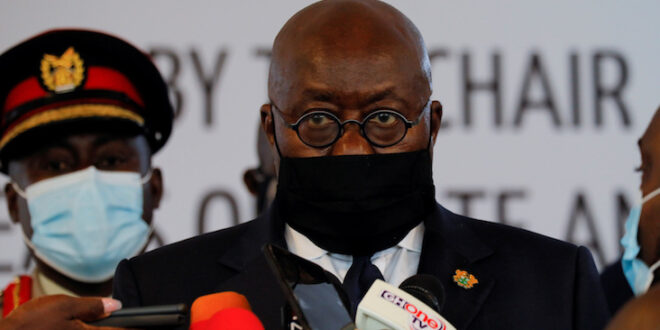 In 2017, President Akufo-Addo stated in an interview on Al Jazeera that the legalization of homosexuality in Ghana is bound to happen in the future.

“I think it is something that is bound to happen like elsewhere in the world,”

His comments attracted serious opposition from Ghanaians who claimed the president was pushing for its legalization. However, Mr. Akufo-Addo was heard in some part of the interview stating that, “I, as president of this nation, I will never initiate or support any attempts to legalize homosexuality in Ghana”.

Read the full story originally published on November 26, 2017, on Ghanaweb

“I think it is something that is bound to happen like elsewhere in the world,” were President Nana Addo Dankwa Akufo-Addo’s words on legalizing homosexuality in Ghana.

In an interview with Al Jazeera, the president disclosed that although legalizing homosexuality is currently not of significance to Ghanaians, there is a likelihood that it would happen in the near future.

The issue of legalizing homosexuality gained massive public interest in 2011 when Late President John Evans Atta Mills strongly refused to legalize it, after the UK threatened to reconsider aids given to countries that are against homosexuality. Reports indicated that Britain put on hold ‘£19 million in aid to Malawi because of concerns including its treatment of gays’.

He is reported to have said, “I, as president of this nation, I will never initiate or support any attempts to legalize homosexuality in Ghana”.

Most Africans frown at the thought of legalizing homosexuality as it defies every aspect of their socio-cultural and religious principles.

Homosexuality is illegal in about 30 African countries and has laws that reprimand individuals caught in the act.

In Ghana, there have been several advocates pushing for its ban while some others have argued for it to be legalized.

Human Rights lawyer, Nana Oye Lithur in 2011, when the debate on legalizing homosexuality in Ghana was heightened, was reported to have argued on behalf of gays in the country saying, “We are guided by our 1992 Constitution that states that we are all equal before the law and every person in Ghana possess human right.”

“So if we have homosexuals in Ghana once they are human beings they have human rights. Nobody has asked for homosexuality to be legalized, from the law, what we as human right advocates are saying is that once the person is a human being and resides in Ghana we ask institutions to accord that person the respect as a human being,” she added.

The current speaker of parliament, Professor Mike Oquaye who is known to have a strong opinion about homosexuality described it as “abominable” and has called for a complete ban on the act.

Professor Mike Oquaye who is also a man of God said, “It is unfortunate that people have become so liberal that they will want to liberalise Christianity…even priests are approving of homosexuality and allowing a man and a man [to] marry, a woman and a woman [to] marry and these are manifest abominations.”

“I trust that with your kind of insistence, the Parliament of Ghana…will find its way clear in strengthening the laws to ban homosexuality as they exist. As for this, may God forbid that it becomes a Ghanaian culture,” he noted.

President Akufo-Addo mentioned during the interview however that, what may push the government to legalize homosexuality would be social pressure from individual and groups saying those are major contributors to the legalization of gayism in most parts of Europe and America.

“I don’t believe that in Ghana, so far a sufficiently strong coalition has emerged which is having that impact on public opinion that would say change it and let’s now have a new paradigm in Ghana. I grew up in England and I grew up in a time where homosexuality was banned there, and then suddenly the activities of individuals and groups, a certain awareness, a certain development grew stronger and it forced in changing law,” he explained.

“I believe that those are the same processes that will bring about changes in our situation. At the moment I don’t feel, I don’t see that in Ghana there is that strong current of opinion that is saying this is something that we need you to deal with,” he added.

I'm Adwenpa-Hene |Blogger & Broadcaster Journalist. I am the CEO and manager of this noble website. I publish on Entertainment, Sports, Politics, Lifestyle, and Technology. You can also follow Us on : YouTube Channel - My Ghana Media TV, Facebook - MyghanaMedia TV , Twitter - @MyGhanamedia2 & Instagram - My Ghana Media TV. Email Address: [email protected] Contact Us: 0200818719
@@MyGhanamedia2
Previous Nana Konadu Not The Founder Of NDP – Owusu-Cobbiah
Next Dr Josiah B Andor Outdoor “Little Giants”