Breaking News
Home / AFRICA NEWS / Former Gambian President, 13 Others To Be Tried For Murder Of 44 Ghanaians 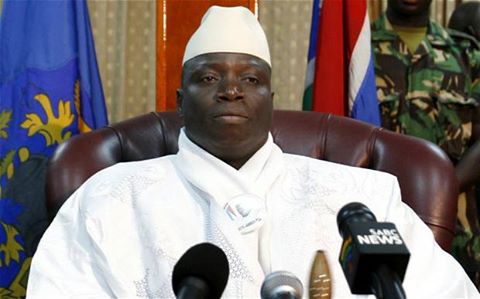 Former Gambian President, 13 Others To Be Tried For Murder Of 44 Ghanaians

Families of the 44 Ghanaians who were murdered in Gambia alongside some other West African nationals appear to be getting closer to securing justice and reparation.

A white paper signed off by Gambian President Adama Barrow appears to clear earlier doubts about the commitment of the Gambian Government to prosecute its former President Yahya Jammeh for gruesome killings, extra judicial executions; mysterious disappearances and atrocious human rights violations committed under his presidency.

The white paper which Okays the report of the Truth, Reconciliation and Reparation Committee (TRRC) commits to prosecute the former military leader and 13 personnel of his paramilitary jungler hit squad implicated in the 2005 summary killings of the Ghanaians and other West African Nationals arrested off the coast of the Gambia while they were using an irregular migration route to Europe.

The government of Gambia has also committed to releasing US$612 thousand as compensations to the surviving families and victims of the atrocities as recommended by the TRRC.

Per the white paper, access will further be given to a forensic team to exhume pits where the African Migrants were shot, dumped and buried under the orders of Yahya Jammeh.

Disclosing details of the May 25 white paper in Kumasi, coordinator for the Justice to Jammeh Coalition and Director for the Africa Center for International Law and Accountability (ACILA), William Nyarko was optimistic the white paper will be a game changer on the continent.

He is confident African leaders will be minded about the legal repercussions on acts of impunity and human rights violations.

“This is going to be a signal to other African Heads of State that these unlawful killings and forced disappearances and torture will not go unpunished,” he indicated.

Though this comes as a major nudge to the Jammeh to Justice Movement; victims and surviving families are unhappy the Akufo-Addo Administration has neither made a public pronouncement nor reached out to the families on these developments.

Brother to one of the victims killed in the waylay, Rev Emmanuel Kerson told Ultimate News, “I am highly disappointed that President Akufo Addo has not said a word or reached out to support us even though he was minister of foreign affairs at the time the incident happened.”

The families who spoke to reporter Ivan Heathcote – Fumador contended they had lost faith in the Ghanaian government for staying aloof leaving the fight solely to the Justice to Jammeh Coalition and its allies.

They are insisting any committee established to disburse the compensations should include reps of victims, families and Civil Society Organizations championing the Justice to Jammeh movement.
Millicent Konadu, Sister of Richmond Boadi who was killed in Gambia pointed out.

“We have been cheated before so this time round; let’s set a committee made up of the families of the victims, the government and the Justice to Jameh Coalition. That way we can find fair grounds to progress.”

She further appealed, “The case has now been won. The ball is in the courts of President Akufo-Addo. He should appeal on our behalf that the money is inadequate and help us get befitting compensations for our relatives who left behind several dependents.”

The judicial elements of the white paper has been referred to the Gambian National Human Rights Commission while the Justice to Jameh Coalition monitors elements of reparation to the victims and surviving families.