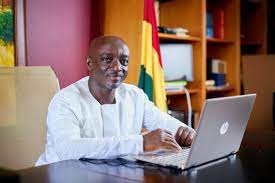 SIGA seeks to facilitate performance management in State Owned Enterprises (SOEs) and other prescribed bodies, within the framework of Government policy, to ensure that they operate efficiently, effectively and profitably thereby contributing towards the socio-economic development of Ghana.

Mr Edward Boateng’s job is therefore cut out for him. Among others, Ambassador Boateng is expected to lead his team at SIGA to oversee and administer the State’s interests in Specified Entities, to ensure shareholder value, financial sustainability and good corporate governance.

Among others, he will also be expected to promote within the framework of Government policy, the efficient or where applicable profitable operations of Specified Entities, ensure that Specified Entities adhere to good corporate governance practices as well as acquire, receive, hold, and administer or dispose off shares of the State in State-Owned Enterprises and Joint Venture Companies.

Further tasks that are required of the SIGA boss and his team are to oversee and administer the interests of the State in Specified Entities; and to ensure that State–Owned Enterprises and Joint-Venture Companies introduce effective measures that promote the socio-economic growth of the country including agriculture, industry and services in accordance with their core mandates.

The Ghana Entrepreneurs Foundation honoured Edward Boateng as Ghana’s Most Outstanding Ambassador for the years 2018 and 2019.

He led Ghana’s mission in China to win recognition for it as the Outstanding Ghanaian Embassy for 2018.
Boateng was also recognized by the United Nations Permanent Representative in China as one of the most hard-working and diligent ambassadors during his term abroad. He helped organize the hitherto dormant African diplomatic corps in China into a very vibrant force.

Boateng initiated and was instrumental in several programmes and projects coming to Ghana from China. Some of these are the James Town Fishing Harbour, the famed Sinohydro MPSA Agreement, restoring the US$3 billion loan that had been suspended, and the technical and vocational education and training (TVET) programme.

He also succeeded in getting Ghana accepted as a member of the Asia Infrastructure Bank (AIIB). He is further credited with the leadership he showed in managing the expectations of Ghanaians in China and ensuring their safety abroad when the COVID-19 crisis began.

On a bilateral level, he worked to make the relationship between China and Ghana reach an all-time high, equalling the understanding between Osagyefo Kwame Nkrumah and Chairman Mao Zedong. This resulted in two state visits by President Akufo-Addo and Vice-President Bawumia from the Republic of Ghana, as well as official visits by the First Lady, the Minister of Foreign Affairs and Regional Integration and the Chief of Staff.

There were also several high-level visits by various Ghanaian ministers of state and reciprocal visits by the Chinese leadership to Ghana, including an official visit by Vice-Premier Sun Chunlan in 2019.

Before serving as a diplomat, Boateng was an African business leader, creating change and impacting lives and communities predominantly through media and philanthropy.

He set up Global Media Alliance (GMA), a pan-African media and entertainment conglomerate, in 1998. In the company’s 23-year existence, it has become arguably not only one of Ghana’s best and most respected media, communications and event management firms, with four diversified radio stations, a television station and cinema houses, but also a groundbreaker in the field of strategic communication consulting, entertainment and public relations in Africa.

From four employees in 1998, the company has developed into a respected international brand with over 300 employees and footprints/affiliates in six African countries, Europe and the United States of America.

Boateng was also on the property development team that initiated and developed the concept of commercial malls and movie cinemas in Nigeria, Kenya and Ghana from 2006-2008.

Before he set up GMA, he was one of the pioneers at Turner Broadcasting (the then parent company of the leading news channel CNN) in Atlanta, Georgia, which transformed news coverage, 24-hour television and the internet in the 1990s. As a key member of the strategic product development and international sales team, he led the company’s business entry and growth in Africa.

He was later sent to Europe as one of the senior executive members of the company’s Europe, Middle East and Africa (EMEA) group, based in London and later in South Africa.

See also  You Can Not Cover Up Your Failure In Fighting Corruption By Firing PPA Boss, ADAM-GH To President

As a pan-Africanist, an innovative and astute businessman and a perceptive negotiator, he has achieved a host of successes. These include making CNN one of the most trusted news brands in Africa, creating entertainment channels such as the Cartoon Network and making them household names. He was also involved in nurturing and developing the African film and sports industries.

Boateng initiated the much-respected annual CNN African Journalist of the Year Awards; an initiative that became a reference for journalism excellence on the African continent. He also started and produced what is now the longest-running magazine programme to date on CNN, the weekly Inside Africa, which chronicles stories from Africa on CNN.

He was one of the architects of private-sector participation in the media on the African continent in the 1990s and helped establish strong media brands in Africa such as the first 24-hour pan-African TV News channel, SABC Africa, as well as e.TV and most of the African entertainment channels on DStv.

His company oversaw and produced the opening ceremony for the 2008 Africa Cup of Nations in Ghana, which the then president of FIFA, Sepp Blatter, described as “wonderful and one of the best ever”.

Before moving to Turner Broadcasting he was with Coca-Cola in Atlanta, where he worked in brand management. He also worked as a fellow in the office of the then governor of Georgia, Joe Frank Harris.

Boateng has also worked with the US Department of Defence through its subcontractor Oak Ridge Associated Universities.
A diligent executor who is meticulous in his approach to work, Ambassador Boateng has worked as an advisor in various capacities to African governments and leaders, including the governments of Nelson Mandela and Thabo Mbeki in South Africa, Olusegun Obasanjo of Nigeria, the former Ghanaian president John Kufuor, the former Nigerian head of state General Abdulsalami Abubakar and lately as an envoy of President Nana Addo Dankwa Akufo-Addo.

He has been a senior advisor to chairpersons, managing directors and senior executives of leading global companies, including Barclays Bank, Dangote Group, MTN, AirtelTigo, the South African Broadcasting Corporation (SABC) and e.tv of South Africa, IPP Media of Tanzania, the Nation Media Group in Kenya, and the Financial Times of London.

In addition, he has served on the boards of many local and international organisations. These include the Millennium Development Authority (MiDA) in Ghana (chairman), the Africa Board of the World Economic Forum (senior member), the Foundation for Journalistic Excellence (chairman), the Gulf Co-operation Council (board member and advisor on strategic communications), the National Communications Authority in Ghana and the African Business Roundtable (board member) and Orphanage Africa (chairman).

He is the patron of the Planeteer Movement of Ghana, an environmental movement which advocates sustainable environmental practices.

Boateng was one of the founding members of the Nelson Mandela Foundation and acted as an advisor to it. He was also one of the key drivers of the first Mo Ibrahim Prize for Achievement in African Leadership. He was instrumental in the development of the Africa CEO Forum, produced by Jeune Afrique.
He has received many international awards and recognitions, including the Order of the Volta (Civilian Division) from the Government of Ghana, the Turner Award, recognition by the City of Philadelphia with the keys to the city, African Business Leader of the Year 2013 by the Jeune Afrique Group in New York, and Media and Entertainment Entrepreneur 2011 at the Ghana Entrepreneur Awards.

Boateng has participated in countless international conferences and events.
He has attended the World Economic Forum, given talks at Harvard University and Tsinghua University, taken part in a high-level round table in Hunan Province on the internationalization of the renminbi, and spoken at Cambridge University, KNUST, the University of Ghana, Witwatersrand University and the China Centre for Globalisation.

He holds a Master’s in Business Administration from Clark-Atlanta University in the United States, a postgraduate diploma from Yale University and a Bachelor’s degree in economics and law from the Kwame Nkrumah University of Science and Technology in Ghana.

He is married with four children.