Breaking News
Home / AFRICA NEWS / Founders’ Day: We Must Work To Free Ourselves From Colonial Power That Binds Us – Akufo-Addo 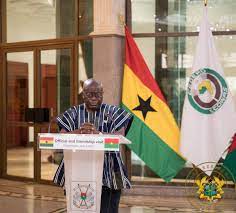 Founders’ Day: We Must Work To Free Ourselves From Colonial Power That Binds Us – Akufo-Addo

President Akufo-Addo has charged Ghanaians to unite and free the nation from the economic arrangement designed by the country’s former colonial power.

Taking to Twitter to commemorate Founders’ Day on August 4, the President noted that such collective action is the best way the country can “pay homage to successive generations of Ghanaians who played significant roles towards the liberation of our country from colonialism and imperialism.”

“We must, as a mark of reverence to our forebears, work to free ourselves from the economic arrangements designed by the former colonial power to serve its particular purpose at the time, which continue to bind us,” he stated.

He also rallied for support to end the neo-colonial structure of the raw material producing and exporting economy.

According to President Akufo-Addo, rectifying the economic structures of the colonial power will help drive the country to a “united, developed, prosperous, free, democratic and independent Ghanaian nation.”

Previously, the country celebrated Founder’s Day on September 21 annually, but was changed by President Akufo-Addo during his first term of office, to Founders’ Day on August 4.

The day is set aside to celebrate the achievements of the men who led Ghana to independence. They are referred to as the Big Six.

I'm Adwenpa-Hene |Blogger & Broadcaster Journalist. I am the CEO and manager of this noble website. I publish on Entertainment, Sports, Politics, Lifestyle, and Technology. You can also follow Us on : YouTube Channel - My Ghana Media TV, Facebook - MyghanaMedia TV , Twitter - @MyGhanamedia2 & Instagram - My Ghana Media TV. Email Address: [email protected] Contact Us: 0200818719
@@MyGhanamedia2
Previous Video: I Joined #FixTheCountry Demo Because Broke Members Can’t Pay Tithe And Offerings – Pastor
Next Mahama To Voltarians: You Didn’t Disappoint Me; You Did Your Best