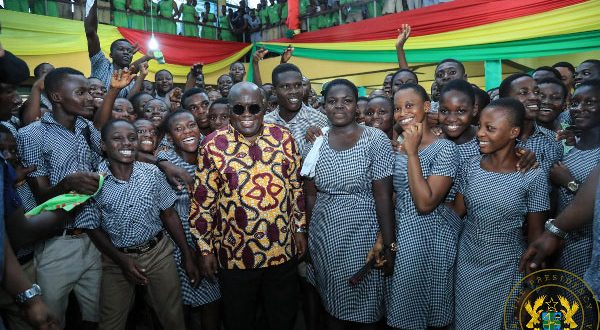 Former Chief of Defence Staff and politician, Brigadier General Joseph Nunoo-Mensah has expressed that the ‘Free SHS’ policy promised by the New Patriotic Party (NPP) was just a tactic to win power from Ghanaians.

The veteran politician shared that he doubts the party believed this policy could change lives.

He told Samuel Eshun on e.TV Ghana’s ‘Fact Sheet’ show: “I don’t believe that whoever made a point of making education free believed that when they make education free, it will improve the life of anybody. It was to get power and Ghanaians like everything free. So, ‘promise that and they will vote for you’. But I doubt that they believe that it will achieve anything. Today I sit before you and I went to school late, spent three and half years in secondary school; it was 5 years then but I can boast of being an all-rounder. But today, I am just saying I’m not happy with the level of education in the country. We should broaden the outlook for our children”.

Brigadier Nunoo-Mensah noted that he is not surprised that the free education was used as a tactic to win power because all over the world, “politicians don’t behave truthfully”. “Look at what happened in America; Trump and others and I can go on and on all over the world. They are opportunists”, he added.

President Nana Akufo-Addo, as a flagbearer of the New Patriotic Party (NPP) since 2008, promised to make Senior High School education free. His promise was described by the National Democratic Congress (NDC) as unattainable.

But in 2017, the free senior high school education policy was introduced. That year, there was an 11% increase in enrolment, breaking records from previous years. In the 2017/18 academic year, a new record was set with the highest enrolment ever seen in the country: over 470,000 students enrolled in senior high school.