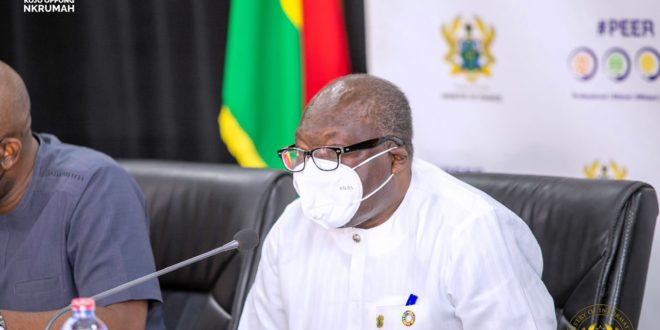 Fuel prices in Ghana will go down by 15 pesewas per litre effective April 1, 2022. This reduction will be in place for three months.

This was disclosed by the Minister of Finance, Ken Ofori-Atta, on Thursday, March 24, 2022, while announcing measures put in place by the government to cushion Ghanaians against current economic shocks.

“To mitigate the rising price of petroleum products at the pumps for the next three months, the government has decided to reduce margins in petroleum price build-up by a total of 15 pesewas per litre with effect from 1st of April,” he said.

See also  Fuel Prices Go Up Despite Removal of PSRL

He said, in addition to the aforementioned measures, the National Petroleum Authority and the Ministry of Energy are in talks with the various Oil Marketing Companies (OMCS) “to reduce their margins in the spirit of burden-sharing”.

Prices of petroleum products have skyrocketed within the last few days.

Diesel is currently selling between GH¢10 and GH¢11 per litre, while the price of petrol has crossed the GH¢9 mark at some filling stations.

This has led to an upsurge in general prices. A recent report released by the Ghana Statistical Service noted that petroleum and food prices are the major driving forces of inflation in Ghana in recent times.

Transport operators are also proposing to increase fares by 20% following the rise in fuel prices, after they last increased fares in February this year.

This has compelled Ghanaians and identifiable groups to put pressure on government to reduce some levies on petroleum products to cushion fuel consumers.
Rising crude to blame for the upsurge in fuel prices

See also  Ken Ofori-Atta: E-Levy Not The Most Egregious Tax

“The rising prices of fuel at the pumps is influenced largely by the rising crude oil prices on the international market and the exchange rate depreciation. Though the rise in crude oil prices should have been to our benefit on net basis, Ghana’s import of petroleum products amounts to 5.2 times the value of the proceeds from its crude oil exports. In 2022, we exported $3,947.70 million, of which Ghana’s portion was $513 million. However, we imported $2,719.00 of crude oil and finished products. The purported windfall gain in foreign exchange is a mirage. From January to date, the average ex-pump price of diesel and petrol have increased by 57% and 45% respectively.”
How much will gov’t lose by reducin margins on fuel prices

The Government of Ghana currently makes GH¢1.90 from a litre of fuel sold at the pumps, according to the Minister of Information, Kojo Oppong Nkrumah.

Following the reduction in the margins on petroleum products, government will still be making about GH¢1.75 on each litre of fuel sold.

This is not the first time the Akufo-Addo government is freezing margins that accrue to it in a bid to reduce prices of fuel.

Government in the latter parts of 2021 suspended the Price Stabilisation and Recovery Levy for three months.