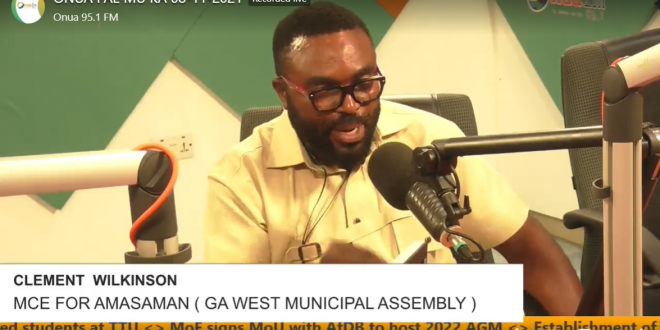 Ga West MCE Says, No Smart MCE Will Wait For Common Fund To Be Able To Work

The Municipal Chief Executive (MCE) for Ga West, Mr Clement Wilkinson, has expressed optimism that the backlog of the District Assembly Common Fund (DACF) would be released to the assemblies.

He revealed that authorities have gradually started releasing the accumulated funds.

He however, noted that the absence of the fund should not impede the work of any assembly with a what he calls a smart MCE because there are other resources available.

Speaking on the ‘Pae Mu Ka’ show with Yaa Titi Okrah on Onua TV, he said “I can say on authority that President Nana Addo Dankwa Akufo-Addo has never disappointed Ga West.

“If you want to be a smart MCE you don’t wait for a common fund because, you have resources to work with. So there is no need to sit down. Common fund is just a support to your municipality and so if it hasn’t come you cannot decided not to work When you are working we do our budget, we add the common fund to the budget.”

Recently, the Minority in Parliament indicated that the government owed the District Assemblies Common Fund (DACF) over GH¢2 billion.

According to the Minority, the figure is made up of disbursements that should have been paid into the DACF from 2019 to 2021.

Speaking at a press on the matter on Thursday, October 21, 2021, the Member of Parliament for Ho Central, Benjamin Kpodo, said the delay in releasing monies to the DACF is adversely affecting the work of Metropolitan, Municipal, and District Assemblies (MMDAs) nationwide.

“In 2021, where nothing has been paid, the estimates for the first and second quarters only, based on their [government’s] own figures, the amount they are owing is GH¢884 million. When you add this, it is indeed over GH¢2.1 billion, which the Ministry of Finance is owing to the DACF.”

I'm Adwenpa-Hene |Blogger & Broadcaster Journalist. I am the CEO and manager of this noble website. I publish on Entertainment, Sports, Politics, Lifestyle, and Technology. You can also follow Us on : YouTube Channel - My Ghana Media TV, Facebook - MyghanaMedia TV , Twitter - @MyGhanamedia2 & Instagram - My Ghana Media TV. Email Address: [email protected] Contact Us: 0200818719
@@MyGhanamedia2
Previous Mahama To Akufo-Addo: Your Job Creation Figures Dubious
Next Ghana Is Not Free From External Security Threats – Kan Dapaah