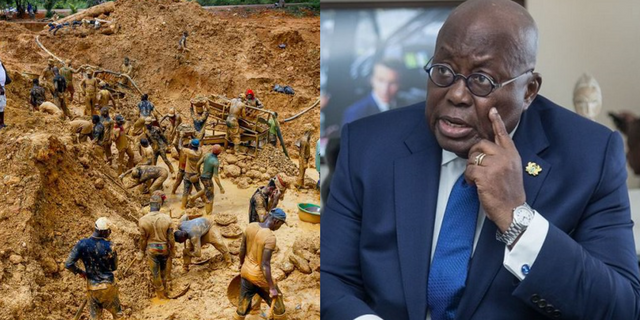 Pressure group Occupy Ghana has criticized government for what it describes as lip service to the pledge to fight illegal mining.

In an open letter to the President, Occupy Ghana expressed disappointment at what it described as obvious ‘impotence’ in spite of the huge resources at governments disposal to address the menace which now threatens the survival of Ghanaians.

Find below the full letter

The main problem with unlicensed mining in Ghana (‘Galamsey’) and the increasing scourge it has become, is the Government’s sheer inability, total unpreparedness and/or blatant unwillingness to enforce the law. We are befuddled and dumbstruck at the Government’s absolute impotence, in the face of the brazen destruction of our lands and wanton poisoning of our water bodies.

Every law required to regulate the mining industry exists. Every Government agency required to enforce the law (namely the Ministry of Lands and Natural Resources, Minerals Commission, the police, the courts and even the military) exists. Every district, municipality and metropolis in which Galamsey takes place has a fully-paid Chief Executive supported by an Authority and Assembly. There are chiefs in all of those towns and villages where the plunder happens. These people cannot feign ignorance and pretend to be innocent in this matter. What is going on defies reason and only gives support and credence to the popular rumour or belief that the very persons who should be fighting this crime, are rather those involved in and benefitting from it.

On 10 July 2017, the presidency.gov.gh website reported that you called the bluff of Galamsey operators and stated that you would put your presidency on the line for the Galamsey fight. You are reported to have added that ‘IT WILL BE A BETRAYAL OF THE TRUST IMPOSED ON ME IF I FAIL TO END THIS.’ Subsequently, you have repeated this pledge in various forms. However, your bold statements are ringing hollow and have petered out; you are failing and, in your own words, betraying the trust reposed in you. Sir, can you simply ensure that the law, namely the Minerals and Mining Act, 2006 (Act 703), as amended, is enforced without fear and favour and irrespective of whose ox is gored?

For our part, we will send a reminder to you every Monday, until we see firm action to stamp this crime out. If that fails, we will shame your Government by going to court to compel the Government to sit up and do its job! That is not a threat, sir; it is a promise.

Yours in the service of God and Country,