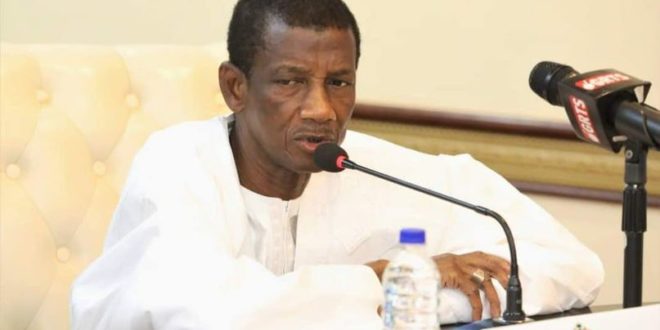 The Gambia’s Vice-President Badara Alieu Joof has died in India.

The vice-president died after a short illness, although Mr Barrow did not mention whether he was receiving treatment in India.

“Fellow Gambians, it is with a heavy heart that I announce the passing away of my Vice President, His Excellency, Badara Alieu Joof. The sad event took place in India after a short illness. May Allah grant him Jannahtul Firdawsi,” the President disclosed on Twitter and Facebook.

Mr Joof was not seen in public for months, reports the BBC’s Omar Wally from the capital, Banjul.

Fellow #Gambians, it is with a heavy heart that I announce the passing away of my #VicePresident, His Excellency, Badara Alieu Joof. The sad event took place in India after a short illness. May Allah grant him Jannahtul Firdawsi.

Mr Barrow picked him as vice president after being re-elected in December 2021 for a second term.

In June, Mr Joof expressed dissatisfaction about the conduct of public affairs, saying Gambians had great expectations and “business as usual” would not lead to decisive change, our reporter adds.

I'm Adwenpa-Hene |Blogger & Broadcaster Journalist. I am the CEO and manager of this noble website. I publish on Entertainment, Sports, Politics, Lifestyle, and Technology. You can also follow Us on : YouTube Channel - My Ghana Media TV, Facebook - MyghanaMedia TV , Twitter - @MyGhanamedia2 & Instagram - My Ghana Media TV. Email Address: [email protected] Contact Us: 0200818719
@@MyGhanamedia2
Previous Man Who Made Cocaine Claims In Viral Audio Tape Against Some Police Officers Arrested
Next “I Cannot Sleep” – Mother Whose Baby Disappeared At 37 Military Hospital Says