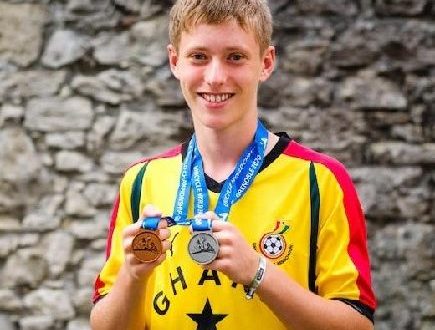 The youngster became the first Ghanaian to ever win medals at the Unicycling Championship after claiming silver and bronze in 30m Wheel Walk Race and 50m One-Wheel Race respectively.

The medals won by Roger Haun III are the first in the history of Ghana at the Unicycling championship.

In a video sighted by DGN Online, the teenager blistered past his opponents to finish second in the 30m Wheel Walk Race.

According to his father William Haun, Roger was given the name “Manboora” by Naa Bɔhagu, Overlord of Mamprugu

Roger first came to Ghana at age 1 and has spent over half his life in Nalerigu. Many international competitions allow you to represent your birth nation or nation of official residence.

The Unicycling Championship began on July 26 and will end on August 6.

I'm Adwenpa-Hene |Blogger & Broadcaster Journalist. I am the CEO and manager of this noble website. I publish on Entertainment, Sports, Politics, Lifestyle, and Technology. You can also follow Us on : YouTube Channel - My Ghana Media TV, Facebook - MyghanaMedia TV , Twitter - @MyGhanamedia2 & Instagram - My Ghana Media TV. Email Address: [email protected] Contact Us: 0200818719
@@MyGhanamedia2
Previous Upper East Region: Robber Stabs And Rapes 32-Year-old Married Woman
Next GPA To Children Of Couple Found Dead In Their Home: We Will Provide The Best Of Psycho-Social Support