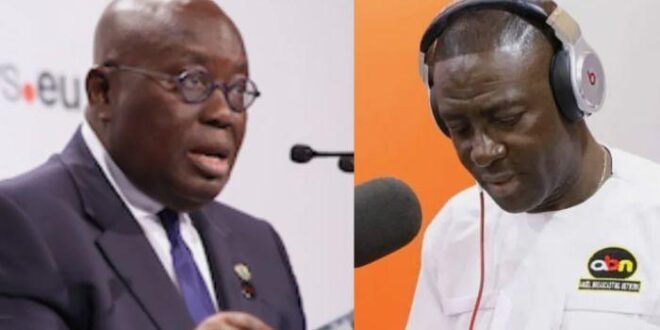 The host of Angel FM Morning Show, Captain Smart, , has called President Nana Addo Dankwa Akufo-Addo, to go to his hometown, Kyebi and stop the galamsey activities that is going on there.

According to him, those involved in the activities are Burkinabés and Guineans who have been hired by the Chinese to destroy the environment including the water bodies.

He continued: “We need good water to drink because we cannot go to London for medical treatment when we are sick but you will be flown to London. When we are sick and we visit the health facility in Ghana, they give us these generic medicines because we are using the National Health Insurance, you don’t use the National Health Insurance so, stop Kyebi galamsey, Nana Addo.”

Captain Smart stressed that, it is very disheartening to see all the water bodies turn brown just because some people want gold to enrich themselves.

He said, the Ghana Water Company had to spend a lot of chemicals to distil the water for it to flow through our taps to drink, something which is harmful to the health of the Ghanaian.

“Ghana Water Company cannot treat the water again for us to drink. One of the engineers told me that the way our water bodies are being destroyed, after we treat the water with the chemicals, and it flows through your tap, you will not be drinking water but chemicals…” he explained.

President Nana Addo Dankwa Akufo-Addo during a forum in Accra to deal with the activities of illegal mining in our communities and water bodies stated that his fight against illegal small-scale mining will not be based on mere allegations.

He emphasized that inasmuch as he is determined to enforce the laws on illegal mining, he is not ready to “act on hearsay or mere allegations without more. I will not hesitate to act though where the evidence is hard before the police.”

“And I will do so irrespective of the standing of the person or persons involved. That is the true meaning of equality before the law,” he stressed.