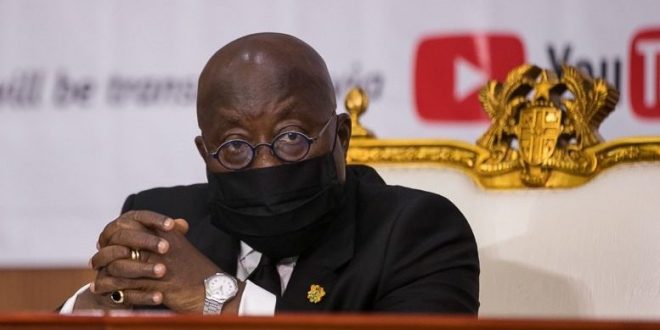 He said taking such an action will significantly affect the government’s revenues.

Addressing the 2022 May Day parade at the Independence Square in Accra, he said the government risks losing about GH¢4 billion if it makes any such move. He added that it is even more untenable because the government is rather looking for more avenues to raise money.

Fuel prices in Ghana have risen sharply in Ghana in the last six months, although they have stayed the same for almost a month.

Amidst the numerous complaints from consumers that the situation is causing a strain on their finances as the cost of goods and services had risen on account of the changing fuel prices, some analysts have called on the government to consider removing some taxes on petroleum products to bring some relief to Ghanaians.

But President Akufo-Addo in a straightforward response to such calls, said the current challenges facing the economy require that the government rather increases its revenue base.

He said the monies raised from taxes such as those on petroleum prices are what is used to pay wages and allowances of workers; hence withdrawing them could affect the payment of salaries.

“Government is currently confronted by very tight financing conditions, in the wake of inadequate domestic revenue mobilisation. Indeed, some of the revenues from these same taxes on petroleum products are what we use to pay some of the salaries of some of the seven hundred thousand (700,000) public sector workers on Government’s payroll.”

Nana Akufo-Addo said despite the government’s decision, it is adopting other measures to mitigate the situation, including stabilising the exchange rate, a key determinant of fuel prices.

“Government is also working hard to ensure reliable supply and availability of petroleum products, thereby preventing shortages, a phenomenon which is being experienced in some other neighbouring countries,” he added, stressing that Ghana being a net importer of petroleum products is exposed to the volatilities on the international market.

“Intense efforts are being made to rehabilitate the Tema Oil Refinery, to enable it contribute to stabilising petroleum prices, which should see the light of day very soon. We are also encouraging private companies to establish refineries in the country, one of which is eighty percent (80%) complete, and is expected to be commissioned before the end of this year,” he added.

I'm Adwenpa-Hene |Blogger & Broadcaster Journalist. I am the CEO and manager of this noble website. I publish on Entertainment, Sports, Politics, Lifestyle, and Technology. You can also follow Us on : YouTube Channel - My Ghana Media TV, Facebook - MyghanaMedia TV , Twitter - @MyGhanamedia2 & Instagram - My Ghana Media TV. Email Address: [email protected] Contact Us: 0200818719
@@MyGhanamedia2
Previous GRA To Refund Wrongful Money Deductions As E-levy Charge To Consumers Due To Technical Hitches
Next NUGs Secures Representation On District Scholarship Selection Committee For All Districts In Ghana