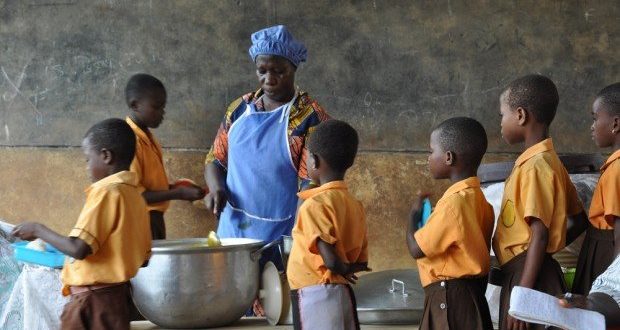 The government has announced the suspension of the expansion of the School Feeding Programme to allow debts owed caterers to be cleared.

This was disclosed by the Minister responsible for Gender, Children and Social Protection, Cecilia Abena Dapaah on the floor of Parliament on Wednesday.

The Minister’s announcement was in a response to a question from the Member of Parliament for Yilo Krobo, Albert Tetteh Nyarkotey on when the programme would be extended to some schools within his constituency.

In response, Mrs, Dapaah said, “Mr Speaker, currently the expansion of the programme is on hold. We are clearing all arrears of caterers and putting in place measures to ensure effective and efficient service delivery to all beneficiary schools as well as the caterers. We are also putting in place a management information system to enhance the efficiency and effectiveness of the system. We shall surely inform this august House when we are ready to expand the programme to cover additional schools,” she said on the floor of Parliament.

In December last year, the Minister reassured that the remaining arrears owed to caterers of the Ghana School Feeding Programme (GSFP) would soon be settled.

She noted that all the necessary data and figures had been worked on and submitted to the Controller and Accountant General for the release of funds to pay the caterers.

Mrs Dapaah said this when answering questions at the Ministry of Gender’s turn at the Meet The Press series in Accra on December 5, 2021.

“When it comes to the School Feeding payment – we have the last lot of arrears to pay. We know the figure, we’ve put in and it’s at the Controller…so very soon we hope to get it,” she noted.

See also  GNECC: School Feeding In The State Of Emergency And Near Collapse

President Akufo-Addo in September last year during a tour in the Western region also disclosed that a sum of GH₵31million had been released by the Ministry of Finance to settle arrears owed to school feeding caterers in the country.

According to the President, he is happy funds have been released by the government to address the challenge, particularly caterers in the Western and Western North regions.

“I am happy to announce that payments have been made to caterers in all the regions. It is true that caterers in the Western and Western North were not paid due to insufficient funds. That has been resolved. The Ministry of Finance has released GH₵31 million cedis for the payment of caterers,” he stated.

At the time the President made the revelation, the Ghana National School Feeding Caterers Association (GNSFCA) had appealed to the government to increase the feeding fees by 50%. Thus, from GH¢1.00 to GH¢1.50.

They said the current amount is unable to cater for much under the prevailing economy.