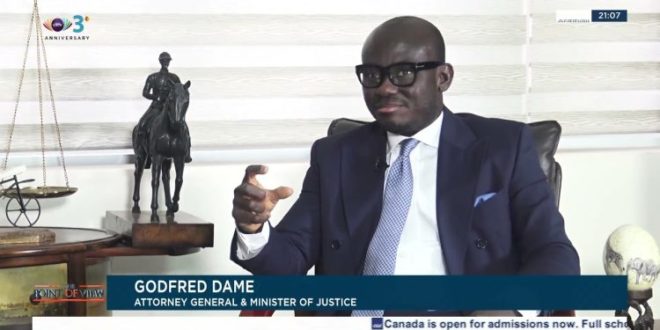 The Attorney General and Minister for Justice, Godfred Yeboah Dame, has stated that the government is committed to protecting the human rights of all minority groups including the LGBTQ+ community

His comments come on the back of concerns raised by the United Kingdom and other countries on the Bill for the Promotion of Proper Human Sexual Rights and Ghanaian Family Values currently before Parliament at the United Nation Human Rights record review in Geneva, Switzerland

Godfred Dame in his response to the concerns raised assured that the government will ensure that the rights of all persons including minority groups are not violated.

“As indicated, the State prohibits all state of violence and brutality targeted at any group of persons in Ghana including all minority groups. All types of violence when reported are effectively investigated and the perpetrators prosecuted.”

Ghana’s Parliament is currently debating an anti-LGBTQI+ bill which seeks to criminalise activities of persons who hold out as lesbian, gay, transgender, transsexual or queer, persons who hold divergent socio-cultural notions of sex, persons with a biological anomaly regarding their gender at birth, persons involved in the promotion of or advocacy and funding for lesbian, gay, bisexual, transgender and queer related activities, as well as persons who conduct surgical procedures to reassign an individual’s gender except for medical purposes.

The Bill also makes any union or marriage entered into by persons of the same sex and persons who have undergone gender or sex reassignment void.

In an opinion to the Chairman of the Committee on Constitutional, Legal and Parliamentary Affairs of Parliament, the Attorney General said the bill will face some challenges when implemented, adding that some provisions will violate some fundamental human rights and freedoms, particularly the right to privacy.