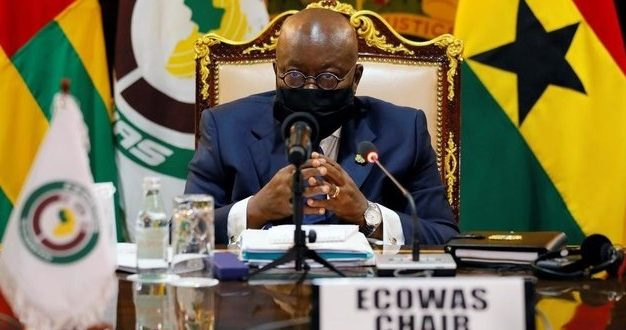 Chairman of the Economic Community of West African States (ECOWAS) President Nana Addo Dankwa Akufo-Addo has said told members states in relation to the coup in Guinea that the regional body is required to take informed decisions on these matters that would have long term consequences to the stability and the defence of democratic values of the region.

He said he is counting on members to help proffer durable solutions to the crisis.

“We are required to take informed decisions on these matters that would have long term consequences to the stability and the defence of democratic values of our region.

“I count on you your Excellencies to help proffer durable solutions to the crisis. I am confident that as in the past, we will rise to the occasion” ECOWAS Chair, President Akufo-Addo said at the extraordinary ECOWAS summit held in Accra on Thursday September 16.

On Sunday, the members of Guinea’s armed forces announced that it had seized power and detained President Alpha Conde.

ECOWAS received flak from some quarters following the development.

For instance, the Dean of the Armed Forces Command and Staff College, Professor Vladimir Antwi-Danso said the imposition of protocols on countries after the coup are not helping but rather a punishment to the citizens living in the country.

Speaking on the Sunrise morning show with host Alfred Ocansey on 3FM 92.7, Prof Vladimir Antwi – Danso said “We sit down for this to happen. Can we have something else to make sure these things do not happen at all.

“Burundi we threatened and threatened them and we said we would instigate force but were unable to even assemble that force; Cote D’Ivoire we said we were going to have 6,500 -man contingent we never intervened. So on and on and on these things will continue to happen when there are crisis situations and we are incapable”

“The imposition of these protocols have never helped anywhere in the world. We dismiss the country; we say we don’t recognize you, infact we rather punish the people within. For example Mali they didn’t have access to their own money”.

Prof.Antwi Danso called for a revision of the peer review mechanisms.

“We should revise it in such a way that when the senior members are doing things that would bring problems, let us advise them. Yes the protocols are clear we won’t recognize you when there is a forceful takeover but when you punish them too much you are exacerbating the situation. We should ensure there is civilian rule”.

But Minister of Foreign Affairs, Shirley Ayorkor Botchwey, said that the ECOWAS attempted to deal with the situation in Guinea that resulted in the coup d’etat.

She explained that a delegation, of which she was a member was sent to Guinea by heads of state of ECOWAS countries to engage with all stakeholders and also with the now ousted President Alpha Conde but it didn’t materialized.

Addressing the press ahead of the Extraordinary ECOWAS Summit, in Accra on Wednesday September 15, Madam Ayorkor Botwhey said “When something like this happens let’s not assume that behind the scenes there is nothing happening, I can assure you that when anything of the sort happens, behind the scenes the Heads of State knowing fully well…that the country has signed on the protocol or the charter but also it is a sovereign state and we have done everything behind the scenes with that colleague to engage.”

“So what you see from the outside is that everybody is relaxed, that is not the case, there is a lot of engagement and if we take the example of Guinea, if you recall, there was a referendum after the change of constitution…ECOWAS did not sit aloof and watch this happen, we engaged and I was even part of delegations that went there, sent by heads of state to engage with all stakeholders and to try and stop this…and engage with the president as well but unfortunately, it did not happen,” she added.