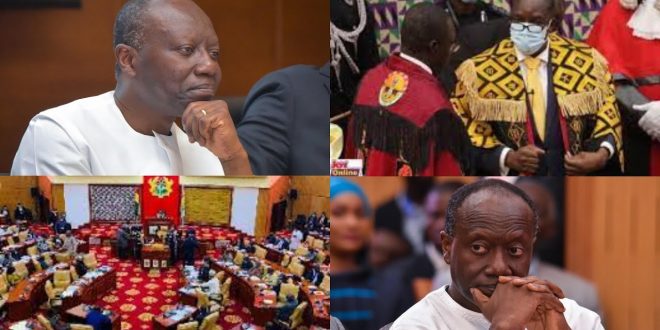 Details have started emerging on how the Speaker of Parliament, Alban Kingsford S. Bagbin betrayed the Finance Minister, Ken Ofori-Atta and some leadership of Parliament ahead of the approval vote on the 2022 budget and Economic Policy of government.

Information available to DGN Online indicates that the Finance Minister put in a request to engage with leadership of Parliament ahead of the approval of the budget.

The Minister successfully met leadership of the House in connection with the budget but the meeting was inconclusive when the leadership agreed to continue on later date before the approval vote because they were delaying in coming to the chamber which was raising tension.

The engagement was in connection with some pertinent issues raised in the 2022 budget.

Some of the concessions the Minister engaged the leadership of Parliament on as mentioned by Majority Leader on Accra-based Joy FM’s News File programme include the Aker Energy deal, the Blekusu Sea defense wall and matters related to allocations to Parliament.

“On the Aker Energy agreement… I brought to the attention of the Finance Minister that how it had been captured in the budget was inaccurate and that they could have looked at the request from the Minister of Energy when he came to Parliament. It finds expression in the request and also in the Hansard, the proper thing ought to have been done.

“The second thing also involved an issue that had been raised by the Honourable Okudzeto Ablakwa in respect of the Blekuso Sea defense wall. And when the Minister of Works and Housing came to relay to it, he said he had put in a request. Apparently, it went under the radar and the Minister was prepared to accommodate that.

“The Speaker himself on the day of the presentation of the budget… the Speaker raised issues about allocation to Parliament and we were going to deal with that. “So on this count, there are some major concessions that the Minister was going to come up with…” Majority Leader said.

He however did not confirm that the Minister had any concessions to make relative to the E-levy.
He referred to a number of policy proposals that were presented to MPs during a budget retreat held a week ago.

Shockingly, the leadership of Parliament arrived at the chamber when Speaker Alban Bagbin refused to pronounce on the Minister’s request in chamber but chose to throw it to the house to vote.

The Speaker made the legislators to vote to determine whether a request by the Finance Minister for Parliament to give him time to consult with leadership of the house on aspects of the budget before the approval vote is held which was rejected.

As if that was not enough, Speaker Bagbin further allowed the 137 Minority MPs to also vote en bloc to reject the 2022 budget as presented by Ofori-Atta.

This provoked Majority Group of the house who decided to walk out before the second voting because of unequal application of Parliamentary rules.

Meanwhile, the issues that Ofori-Atta had gone to engage on were not made public until yesterday, November 27, 2021.

It would be recalled that one-sided House, the Minority Caucus on Friday, November 26, 2021 voted to reject the 2022 Budget presented before the house by Finance Minister Ken Ofori-Atta on November 17.

The Majority Group had earlier walked out of the House after a disagreement with the Speaker on his order to have all non-MPs to leave the floor of the house for a crucial voice vote but allow NDC General Secretary, Johnson Asiedu Nketiah to stay on.

The Majority in a subsequent press conference accused the Speaker of engaging in unconstitutionality vowing to right the wrong that the Speaker and the Minority committed when the House reconvenes coming Tuesday.