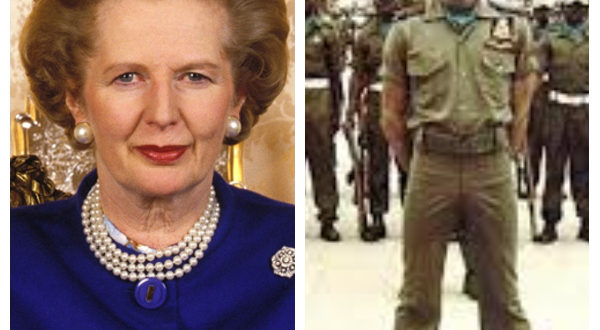 How Then UK Prime Minister Margaret Thatcher Reacted To The Shooting Of I.K Acheampong, Afrifa, others

Per the account of events given by Kojo Yankah in his book ‘The Trial of JJ Rawlings’, it is safe to assume that whereas the killings of the military generals after the June 4 coup enjoyed overwhelming support locally, the international community was not particularly enthused about what they termed to be blood-hunting vendetta by Jerry John Rawlings and his brigade of army officers.

From the media to foreign governments, the condemnation of the actions of the military regime by the international agencies was resounding as opposed to the groundswell of support it had among Ghanaians who kept on demanding more blood.

The book highlighted the total disapproval of the then United Kingdom, India and Nigeria governments to the shooting of military generals, Ignatius Kutu Acheampong, FWK Akuffo, AA Afrifa, and Utuka, among others in 1979.

Margaret Thatcher, the then Prime Minister of the United Kingdom is reported to have indicated her ‘abhorrence’ to the execution of the military generals and said that she had been in touch with US, Canada, and members of the European Economic Community to make representations to the Ghana government about their disdain for the murder of the deposed military regime.

Jerry John Rawlings cited a number of reasons for the failed coup attempt on 15th May, 1979. Firstly, the junior military officers, including Jerry John Rawlings, were refused salaries on countless occasions. Also on the broader scale, issues of widespread corruption among Supreme Military Council officials, poor governance, economic hardship and general frustration on the part of populace as well as high levels of indiscipline within the Ghana Army were among the issues highlighted.

One of the main architects of the uprising, Major Boakye Djan, has in recent times revealed that they deliberately added a political twist to it to help emancipate the whole of Africa. According to Osahene Boakye Djan, after several secret meetings with John Rawlings, the team decided to establish a secret movement known as the Free Africa Movement (FAM) to drive the uprising. Boakye Gyan noted that although Nkrumah fought for the liberation of the whole African continent, Africa still appeared to be under the rule and control of the colonial masters. Boakye Gyan mentions in an interview that though Ghana was independent, the country was not free enough to determine the prices of cash crops like cocoa and other commodities hence the movement.

Prior to the trial was the failed coup attempt by Rawlings and some junior officers on the 15th of May, 1979. On the morning of the day of the coup, there was exchange of fire between the coup plotters and officers of the SMC II. It took the effort and bravery of one senior military officer, Major General Odartey Willington to get to the Ghana Broadcasting Corporation (GBC) to announce that the attempted coup by junior officers of the force had been foiled.

He, Major-General Odartey Willington, one Major Sulemana, other military officers who embarked on the said action at GBC were subsequently rewarded by the SMC II government and Rawlings and the junior officers arrested for trial.

The trial of Rawlings and the Junior officers took place at Burma Hall in Accra. On the day of the trial, as ABC News Ghana gathers, thousands of civilians trooped into the hall to witness the trial. The president of the military tribunal was Col. Aninful and the prosecutor for the state was Flt. Lt. Atiemo.

Rawlings was asked if he wanted a separate trial. His response was “I want to be with my men,” a comment which sparked wild applause in the hall.

Rawlings was found guilty by the tribunal and was imprisoned in a “guardroom”. It was during this time that all his ten fingers were severely damaged.

A key point in the trial was when Jerry Rawlings turned the tables and began accusing the government of massive corruption. He demanded his colleagues accused of aiding him in the treasonable act be set free insisting that he was solely responsible for the attempted coup.

As has been stated earlier, Rawlings was found guilty and imprisoned in a guardroom. Two weeks later, on the night of June 4th, Captain Boakye Djan led other officers to overthrow the SMC II government and released Rawlings from prison. He was then sent to GBC and the government overthrow was announced. Rawlings was made to speak to allay fears of his death as had been earlier rumoured.

Notable on the day was a display by Major-General Odartey Willington. He entered an armoured car and single-handedly shot for three continuous hours. When he ran out of cartridges, he dashed to the Nima Police Station to surrender.

Unfortunately, he was killed on the spot by military officers immediately he came out of the armoured truck. He was given a somewhat befitting burial by Rawlings.

That incident marked the beginning of the uprising.

After the incident, all military installations were searched and senior military officers who were on the side of the SMC II were killed. It was on the same day that Col. Aninful, the president of the military tribunal that tried Rawlings and the junior officers on 15th May was killed. His wife and children who were also in the same room were shot. Many sympathizers of the previous government fled the country to seek asylum elsewhere.

The coup plotters then set up the Armed Forces Revolutionary Council (AFRC). The membership was as follows;

The Aftermath of the Revolution

The regime introduced what become known as the “House Cleaning Exercise”. The House cleaning exercise was mainly against corruption. Three former military leaders of Ghana, Lt. Gen. Afrifa, Gen. Acheampong and Lt. Gen. Akuffo were all executed together with five other senior officers deemed to have been corrupt by the Special Courts set up by the government. That was when the infamous slogan “let the blood flow” originated. Supporters of the regime used this slogan to rally military support in killing sympathizers of the previous regime who were deemed corrupt.

See also  Kadjebi To Get A New Lorry Park

Numerous business entrepreneurs were also targeted and had their assets confiscated by the government.

Critics of the regime note that the period witnessed high levels of indiscipline among the junior officers towards senior officers and civilians. The Armed Forces Revolutionary Council (AFRC) soon lost control of the soldiers who had gone on rampage. There was total breakdown of law and order, a situation which led to arbitrary arrests, beatings, abductions, killings, detentions, and seizure of money and personal property by soldiers.

The AFRC ruled from June 1979 to September 1979. Power was handed to Dr. Hilla Limann in September 1979. But Rawlings again overthrew Limann on 31st December 1981. Though June 4 became a noted date in Ghana’s history, it has been said to be a date that brings a lot of pain to people who either lost loved ones, lost businesses or had to flee the country for their dear lives

I'm Adwenpa-Hene |Blogger & Broadcaster Journalist. I am the CEO and manager of this noble website. I publish on Entertainment, Sports, Politics, Lifestyle, and Technology. You can also follow Us on : YouTube Channel - My Ghana Media TV, Facebook - MyghanaMedia TV , Twitter - @MyGhanamedia2 & Instagram - My Ghana Media TV. Email Address: [email protected] Contact Us: 0200818719
@@MyGhanamedia2
Previous Central Region: FDA Disposes Of Unwholesome Products Worth ¢250k
Next I Have Not Been Paid By Ghana For Winning The FIFA U20 World Cup In 2009 — Coach Sellas Tetteh