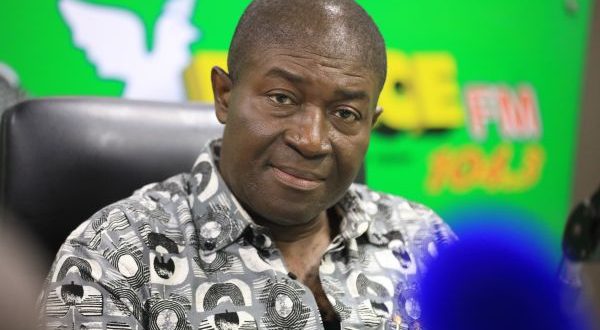 Managing Director of the Intercity STC Company, Nana Akomea, has refuted reports attributed to him that President Nana Addo Dankwa Akufo-Addo’s promise to reduce fuel prices was only a campaign talk.

According to a publication, Nana Akomea said the President’s promise should not be held against him emphasizing it was borne out of excitement of the political campaign.

Nana Akomea, who was on Metro TV’s Good Morning Ghana show last week with the Member of Parliament for North Tongu, Samuel Okudzeto Ablawka reportedly stated; “Every political leader on campaign makes the same comment. CJA, where Sammy Okudzeto says that is where he got his political influence, they made the same sentiments. All of them. When leaders are campaigning they make these promises but when they come into office, there is a reality check.

“When you are a political leader and you make certain statements as part of your messaging to the Ghanaian people and you come into office and see that the reality is different, you need to go back to tell them why you made this promise but why it is difficult for you to fulfill that promise. You need to do that.

“President Kufuor is very famous for that when he talks about some issue that he campaigned against the Rawlings government. When he came into government and realized that the reality of the situation is that he couldn’t do much about it, he actually acknowledged and accepted it. He came out and said it is different and acknowledged it. I think leadership should acknowledge it.”

His comment came on the heels of the current fuel price hikes by some Oil Marketing Companies (OMCs).

The prices of petrol and diesel at some pump stations have increased to GH¢6.90.

But the NPP stalwart has dismissed the report.

Clarifying issues during Peace FM’s ”Kokrokoo”, the STC Boss told host Kwami Sefa Kayi that his statements have been misconstrued as the word about the President’s promise being a campaign promise didn’t emerge from his mouth but rather a conclusion made by some bloggers.

He explained his actual remarks stressing what he said was, “every politician use petrol prices to campaign. I remember, during the regime of President Kufour when he was campaigning, we would send gallon to rally but when he came into power, petrol prices went up during his time. When NDC was campaigning, Committee for Joint Action (CJA) led by Kwesi Pratt, they also used it to campaign against President Kufour…but when they came into power, they also experienced petrol price increases…They came to meet 28 pesewas tax on a litre and when they left power, it had increased to 146 pesewas on a litre. So, everyone campaigns with it”.

“When you’re a politician and outside government, you see things differently but when you come into government and the reality dawns on you and you find out you can’t fulfill some of your promises, you have to be honest with the people,” he added.

Nana Akomea warned the bloggers and the media practitioners who enjoy sensationalism to desist from such character.

“When you watch the video, I didn’t say that and when you read the story too, they quoted what I said exactly but their headline doesn’t reflect the quotation. When you read the story, the headline is not part of the story…But they need to watch it because, in journalism, you have to report precisely what the person said,” he cautioned.