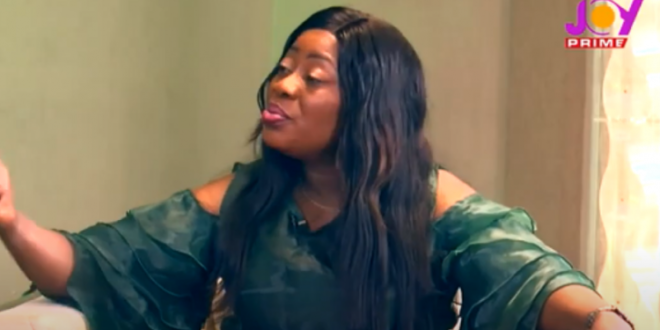 Gospel musician, Agnes Opoku Agyemang has revealed how her former husband went ahead to marry someone else while they were legally married.

However, she forced herself to stay in the marriage believing that her husband being a pastor will change for good until the worst happened to her.

“Upon all the problems, I refused to divorce my ex-husband because of societal pressure. I was still married to him when I heard he has married another woman,” she stated.

Speaking on Changes on Joy Prime, the gospel singer indicated that during the initial stages of the ups and downs in her previous marriage, some fellow pastors of her ex-husband advised her to divorce but all to no avail.

Agnes Opoku Agyemang indicated she opted to stay in the marriage to overcome the problems and the criticisms considering all that she preached to others.

She added that spreading the gospel is an adventure that curtails the freedom of most women who are into it because of the beliefs people have about them.

“I was determined not to leave my matrimonial home despite all the maltreatment, I was strong to endure all the pains because of the word of God. Most importantly, I believed my ex-husband who is a pastor will be touched by God to change”, she told Roselyn Felli.

Agnes Opoku Agyemang emerged onto the Ghanaian gospel music scene in 2002 with ‘Yi Madesua’ album and has become a household name today. After a successful debut album, she found reasons to praise God even more and so followed with the award-winning album, ‘Mensan Makyi’ in 2003.

Touching on her music career, she recalled how she started to write her songs at age 12 while in the Catholic choir but had to wait for six years to come out with her first album because she had no manager to produce back then.

However, she parted ways with the producer

in 2004 and has since produced her songs single-handedly with five albums to her credit.

“After JSS, I started recording my songs because I realised that God has given me a talent so I decided to make good use of it. It wasn’t easy but I tried until I met my first producer, Steve, who helped to produce my first three albums.

“By the grace of God, I write all my songs. I draw inspiration from the things around me and transform them into gospel because I love the word of God”, she noted.

I'm Adwenpa-Hene |Blogger & Broadcaster Journalist. I am the CEO and manager of this noble website. I publish on Entertainment, Sports, Politics, Lifestyle, and Technology. You can also follow Us on : YouTube Channel - My Ghana Media TV, Facebook - MyghanaMedia TV , Twitter - @MyGhanamedia2 & Instagram - My Ghana Media TV. Email Address: [email protected] Contact Us: 0200818719
@@MyGhanamedia2
Previous NAPO Panics Over His US$3 Million To Otumfuo
Next Today’s Newspapers Headlines; Thursday, 28th April, 2022