Breaking News
Home / GENERAL NEWS / I Will Work With Newly-Elected National Executives To Bring Back NDC In 2024 – Dr. Kwabena Duffuor 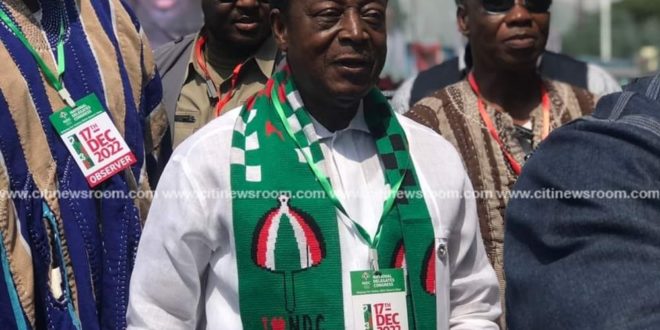 I Will Work With Newly-Elected National Executives To Bring Back NDC In 2024 – Dr. Kwabena Duffuor

AN ASPIRING Presidential Candidate of the National Democratic Congress (NDC), Dr Kwabena Duffuor, has congratulated winners of the national executive positions at the 10th National Congress of the NDC held at the Accra Sports Stadium in the Greater Accra Region on Saturday December 17, 2022.

The opposition NDC during the weekend elected national executives for steer administrative affairs of the party for the 2024 general elections.

George Opare Addo will continue to serve as the National Youth Organizer of the party while Dr. Louisa Hannah Bissiw will lead the women’s wing of the party.

However, speaking in an interview journalists on Sunday to congratulate the winers of the contest, Dr Duffuor urged the newly-elected national executives to work in the interest of the party.

Consequently, the former Governor of Bank of Ghana has indicated his commitment and readiness to work with the newly-elected national executives to bring back the NDC into the political power in the 2024 general elections to save Ghanaians from the current economic hardships in the country.

He also appealed to the winners to bring on board the defeated aspirants in their quest to secure victory for the party come 2024.

See also  There's Too Much IndisciplineToo In NDC But I’m Still Happy To Be A Member – E.T Mensah

Dr Duffuor also urged the defeated candidates to avail themselves whenever called upon to work in the interest of the party for victory 2024.

The former Minister of Finance and Economic commended the Electoral Commission (EC) and the party for successful regional elections.

He singled out winners of the branch elections in the UK and Ireland Chapter of the party for a special congratulations.

He appealed to them to stick together and work collectively to better position the party for the impending parliamentary and presidential position elections in the coming days.

According to him, in spite of the recent economic crisis Ghana finds itself in, the NDC needs to work hard to assure Ghanaians it has answers to the country’s economic problems.

See also  ‘Most Ghanaians Feel They Have Been Hoodwinked, And This Is Manifesting In Their Personal Livelihood' – Mahama

The NDC Presidential hopeful, has therefore, appealed to the party delegates to him as their next flagbearer since he has the required experience and competence to help steer affairs of the party back into government.

I'm Adwenpa-Hene |Blogger & Broadcaster Journalist. I am the CEO and manager of this noble website. I publish on Entertainment, Sports, Politics, Lifestyle, and Technology. You can also follow Us on : YouTube Channel - My Ghana Media TV, Facebook - MyghanaMedia TV , Twitter - @MyGhanamedia2 & Instagram - My Ghana Media TV. Email Address: [email protected] Contact Us: 0200818719
@@MyGhanamedia2
Previous Argentina Win Dramatic 2022 World Cup Final
Next President Akufo-Addo React On Appreciation Of The Cedi Against The Dollar