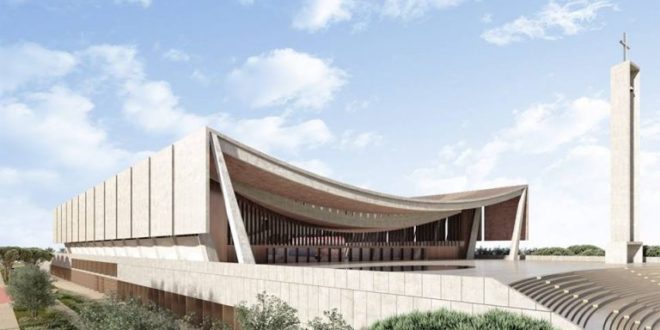 The IMANI Centre for Policy and Education has highlighted some challenges with the National Cathedral project in its latest policy document.

The document drifts away from fundamental issues of politics and morality of the project and focuses on matters bordering on procurement, viability, and sustainability.

It also questions the socio-economic justification for the project.

The inter-denominational cathedral which is expected to have an auditorium capable of seating 5,000 people, as well as chapels and a baptistery, has been criticised by various groups and individuals.

The President has said the controversial project is in fulfilment of a promise he made to God in the run-up to the 2016 election.

Below are the ten issues IMANI raised in its document

Ghana already has 40 orthodox/traditional cathedrals. There are also over 120 cathedral-scale Christian worship centers. There is almost no native religion complex worthy of a visit. Komfo Anokye’s hometown has been completely neglected as have the Sakumono & Korle shrines. Given a large number of basilicas and cathedrals worldwide, can a 21st-century cathedral with no history or spiritual pedigree distinguish itself? Is Ghanaian Christianity sufficiently distinctive to allow the creation of a visit-worthy site and Bible Museum?

Why isn’t the Christian Community, its philanthropic allies and the faithful taking responsibility for building an extra “cathedral” if indeed they are as supportive as the government claims they are? The National Ecumenical Center in Nigeria was started in 1989 . Christian denominations were responsible for finding the money. In 2004, Christians woke up to their responsibility and raised 3 billion Naira, which was then a reasonable $23 million to complete it by 2005. The Nigerian President, Olusegun Obasanjo, merely served as Treasurer for the project. He did not pump public funds into the construction. He relied on his personal goodwill to mobilise private donations.

Even before construction reached ground level, costs had ballooned from $100 million to $400 million. This is a clear and incontrovertible sign that the project was poorly designed from the start and the very concept mired in sheer confusion/

From an initial estimate of $100 million, the financial commitment climbed to $190 million, then $250 million. Late last year, it was said to be $350 million. And now, according to the General Counsel of the lead contractor, it is $400 million. None of the justifications for these estimate revisions have been shared

The government disregarded the law by sole-sourcing the project to Adjaye despite the clear conditions and thresholds laid out in the procurement law for sole-sourcing. It also committed the nation in contracts to spend far more than was expressly approved by the procurement authorities while refusing to openly disclose spending plans in the budget so that funds can be appropriated for the project in a way that would ensure scrutiny by the legislative branch. The failure to disclose the full set of financial commitments, disbursements and liabilities to Parliament despite several budget cycles since project inception, leading to strong suspicions of underhand spending, crooked dealings and corruption-related conduct is questionable. Why were architects and contractors not yet in good standing with the appropriate regulatory authorities in the construction and architectural industry in Ghana engaged for this project? Actions and duties reserved for the Board of Directors of the National Cathedral under Ghanaian law have been appropriated by the Presidency.

“Cathedral” is a technical term; churches with an episcopal hierarchy build cathedrals. It is NOT a generic Christian term. A cathedral is the SEAT OF A BISHOP. Ghana has no “National Bishop”. There is NO established church so there cannot be a “National Cathedral”. Hence while in Nigeria, they called theirs a National Christian Center” and previously “National Ecumenical Center”, the Government’s incorporation of an “interdenominational church” through the Museum’s Board confuses an already messy situation. At most, a “chaplaincy” model as used in Ghanaian universities, hospitals and the armed forces should have been adopted. The building itself should have been owned by a statutory body and operated by a chaplaincy system established by the Christian churches

Given his 20-year industry record, it is noteworthy that Ghanaian public institutions will, since 2018, suddenly start awarding large contracts to Adjaye without any design competitions or even basic tenders taking place.

The government has entered into secret pacts with the Museum of the Bible (MOTB), Nehemiah Group, and Cary Summers (all linked to the Green Organisation in the US) for assistance in developing Christian tourism around the National Cathedral. The experience of these individuals and organizations in their own backyard and operations proves that “bible museums” are extremely hard to run and fully cover costs. In MOTB’s desperation, it has had to grapple with artifact fraud and antiquities trafficking. Fundraising strategies developed for the Ghanaian “National Cathedral” have so far failed spectacularly. Museum of the Bible (Washington DC), part of the bevy of international Christian tourism advisors to the National Cathedral, has faced lawsuits for antiquities fraud and smuggling and has come under state investigations.

I'm Adwenpa-Hene |Blogger & Broadcaster Journalist. I am the CEO and manager of this noble website. I publish on Entertainment, Sports, Politics, Lifestyle, and Technology. You can also follow Us on : YouTube Channel - My Ghana Media TV, Facebook - MyghanaMedia TV , Twitter - @MyGhanamedia2 & Instagram - My Ghana Media TV. Email Address: [email protected] Contact Us: 0200818719
@@MyGhanamedia2
Previous North Tongu MP Seeking To Achieve Prominence With Negative Attacks On President Akufo-Addo – Presidency
Next Presidency To North Tongu MP: Akufo-Addo’s Travels Have Benefits, What About Yours?