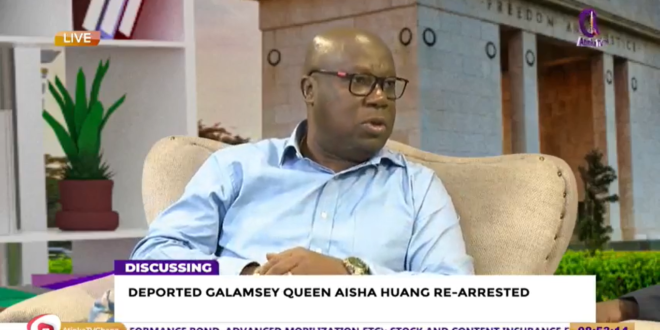 The accused persons were charged for engaging in sale and purchase of minerals without a licence.

The other three are Jong Li Hua; Huang Jei and Huiad Hiahu, all Chinese nationals.

Aisha Huang is facing an additional charge of engaging in mining without a licence.

She was arraigned last Friday [September 2, 2022] and her plea to the charges are yet to be taken by the court presided over by Bright Acquah since the court had no Chinese interpreter at the time.

While the three other suspects were arraigned Monday, September 5, 2022, Aisha Huang was absent.

They have all pleaded not guilty to the charge and have been remanded into custody to reappear on September 14, 2022.

According to the facts presented by the prosecutor, Detective Chief Inspector Frederick Sarpong, Aisha Huang had previously escaped prosecution in Accra when she was arrested in 2018.

According to the prosecutor, she returned to her country [China] and changed her identity only to come back to Ghana to commit the same crime of which she escaped prosecution earlier.

According to the prosecution, the suspect applied for a Togo visa and went through the borders into Ghana and back to the galamsey business in a town in the Ashanti Region.

The three others with her, according to the prosecutor, were selling mining equipment and dealing in gold without a valid licence in Accra.
They were arrested upon intelligence by National Security officials.

Speaking on Atinka TV‘s morning show, Ghana Nie with Ekourba Gyasi Simpremu, Mr Joseph Ade Coker said the issue was an embarrassment to the government and the country as a whole.

Mr Joseph Ade Coker also stated that Aisha Huang’s re-entry means Ghana was not secured, adding that terrorists could be here and the security was waiting for them to commit a crime before they arrest them instead of embarking on preventive measures.

See also  Aisha Huang’s Accomplice Collapses In Court
Thanks for reading from MyGhanaMedia.com as a news publishing website from Ghana.

I'm Adwenpa-Hene |Blogger & Broadcaster Journalist. I am the CEO and manager of this noble website. I publish on Entertainment, Sports, Politics, Lifestyle, and Technology. You can also follow Us on : YouTube Channel - My Ghana Media TV, Facebook - MyghanaMedia TV , Twitter - @MyGhanamedia2 & Instagram - My Ghana Media TV. Email Address: [email protected] Contact Us: 0200818719
@@MyGhanamedia2
Previous Over 35 Civilians Killed In Burkina Faso Attack
Next Kumasi: 3 Persons Burnt To Death , One Escapes Unhurt After Fire Razes Down Three-bedroom House At Ohwim