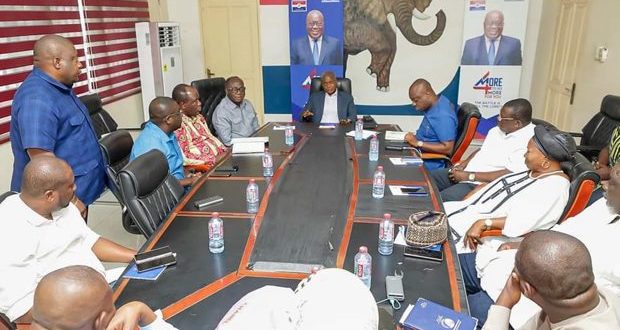 John Boadu Missing At NPP Handing Over After Shocking Defeat

The immediate past General Secretary of the New Patriotic Party, John Boadu who lost his position barely five days ago to Justin Frimpong Koduah, alias JFK in the keenly contested election held at the Accra Sports Stadium has gone missing from public since his defeat.

John Boadu has not come out with any statement either to congratulate the winners as the other losers have officially made public statements and also congratulated the newly elected executives.

The old Executives of the party on Thursday were in the party headquarters to hold an official handing over ceremony chaired by the former National Chairman, Freddie Blay to Stephen Ntim, the New Chairman, and his Executives but John Boadu was missing at the ceremony as well.

See also  Bawumia Strikes NDC Again; Describes Them As The Party Of 'It Is Impossible'

It’s unclear as to what prevented him from attending the handing over meeting, as the Chief Executive Officer of the party.

Scores of party members who expressed worry over his absence at the meeting took to social media guessing he is recovering from the shocking defeat over the weekend.

The era of John Boadu as the General Secretary of the New Patriotic Party (NPP), ultimately came to an end as he lost his position to the Chief Executive Officer of the Youth Employment Agency (YEA), Justin Kodua Frimpong after a long day of stress.

Ahead of the Annual Delegates Conference of the NPP, Justin Kodua was tipped as the winner of the elections even though 15 out of the16 Regional Chairmen led by the Ashanti Regional Chief, Bernard Antwi Boasiako aka Wontumi openly endorsed John Boadu.

At the conference grounds, there were indications that John Boadu was losing as the delegates from the party world bank Ashanti Region were chanting “We need Change”.

John Boadu was seen moving up and down looking very worried trying his best to gain sympathy votes from the delegates.

His campaign member, Chairman Wontumi was hooted at by the delegates from the Ashanti Region when he went to them to canvas votes for John Boadu.