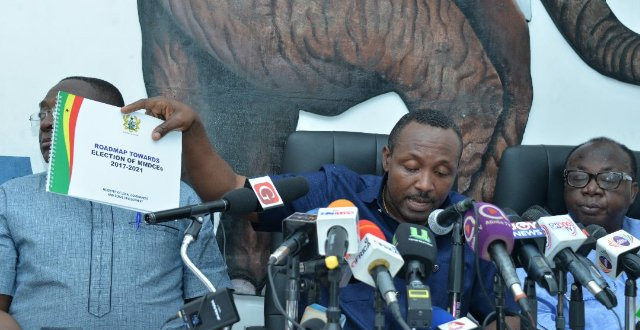 Defeated General Secretary of the New Patriotic Party NPP John Boadu is set to launch a grand comeback after being notified of a cabinet appointment with back up of two CEO positions also on offer.

Mr. John Boadu is expected to be named to a cabinet position in the upcoming reshuffle where our sources say about 4 new faces will be introduced into government with some ministers expected to move to new duty posts.

Sources say John Boadu is likely to be named Minister for Local Government and Rural Development where he is expected to work closely with the base of the party, especially MMDCES most of whom owe their jobs to his lobbying.

Mr. Boadu is considered a “trusted darling boy” of both President Akufo-Addo and Vice President Dr. Mahamudu Bawumia who want him to stay close to government despite his Accra Sports Stadium defeat.

Government Sources also told MyNewsGh.com John Boadu who is serving on the Board of the Tema Oil Refinery has been under consideration to be offered the job of the company CEO to take over after dissolution of an Interim Management Committee.

Mr. John Boadu would be following in the shoes of Dubik Mahama, who was moved from the ECG Board to replace Engineer Budu who was forced out of office by powerful government forces against his will.

John Boadu who is trained as an accountant has served the NPP for the past 20 years in various capacities ending in his defeat by Justin Frimpong Kodua last year.

See also  John Boadu: I Blame Myself For My Defeat

Mr. Boadu is also under consideration to be reportedly named the replacement Managing Director of the Bulk Oil Storage and Transportation Company BOST to replace Edwin Provencal who has come under fire in government circles.

Sources say although John Boadu has “good relations with some persons close to the current occupant of the company’s top seat”, he may consider it “when we get there”.

BOST has been a subject of intense lobbying in 2021 with several forces resisting the reappointment of Edwin Provencal.