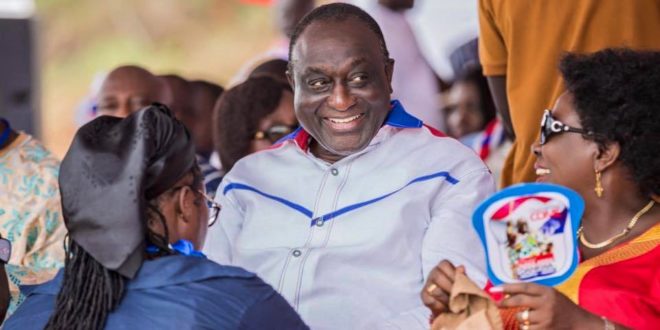 Komenda Sugar Factory: Former Board Member Takes On Minister of Trade And Industry Over ‘False Statements’

A former member of the Management Board of the Komenda Sugar Factory Project, Ransford Chatman Vanni-Amoah, has rejected a number of claims made by the Minister of Trade and Industry, Hon. Alan Kyerematen concerning the state of the factory.

Mr Vanni-Amoah, who was also the Secretary of the Board, referred to some of the claims made by Alan Kwadwo Kyerematen as “false statements”.

Mr Kyerematen spoke on the state of the factory in the face of government’s request for a bailout from the International Monetary Fund (IMF) on Metro TV’s Good Evening Ghana last Thursday.

The former Board Secretary said he is surprised the Minister talked about importation of raw sugar for the Komenda Sugar Factory when the IMF is going to hammer on home-grown policies.

Find the response below:

On Thursday, July 7, 2022, the Minister of Trade and Industry, Mr. Alan Kyerematen’s prerecorded interview with Paul Adom Otchere on Good Evening Ghana was aired, in which he made some false statements when he was asked about how he would situate the Komenda Sugar Factory in the I.M.F conversation.

Mr. Kyerematen stated that “the NDC Government took a loan of over 35 million dollars to try and retool the Osagyefo Dr. Kwame Nkrumah’s Sugar Factory”.

The truth remains, and it must be clearly stated that, the credit facility of US$35 Million from the EXIM Bank of India was used to build a brand-new state-of-the-art sugar processing plant. The distance between the locations of the John Mahama/NDC’s Komenda Sugar Development Company Limited (KSDCL) and the Osagyefo Dr. Kwame Nkrumah’s Ghana Sugar Estates Limited (GHASEL) is about three kilometers apart. How could a minister who is on top of his job make claims to the effect that the NDC Government retooled the old factory?

He also stated that, “in the planning process of the factory, there was no provision of sugarcane on sustainable basis.”

He also falsely intimated that, “some significant number of components that would have allowed the factory to work properly were not installed.” That statement is absolutely spurious. We bequeathed to the Akufo Addo/NPP Government a complete factory which had no technical deficit. Any serious government would not let the contractor leave without executing the specifications of the contract if Alan’s assertion is anything to go by.

He said that “the E.O.C.O conducted a forensic audit of the factory and initial report put the factory at US$16 million.” If a brand-new state-of-the-art factory should have cost US$16 million according Alan Kyerematen, why should he use US$11 million to do sandblasting and paintings of that same factory. If you convert the Cedi equivalent of these two figures, it clearly shows that the cost of renovation is higher than the supposed US$16 million he quoted.

The minister asserted that “the factory is a private company.” Ghanaians demand to know from the minister who are the shareholders of the company, because it may be sold to someone on the blindside of Ghana’s Parliament. I want to unequivocally put on record that, the Government of Ghana is the 100 percent shareholder of the Komenda Sugar Development Company Ltd which was established in 2016.

He said that “the management of the company will import raw sugar to complement the supply of sugarcane from the local farmers to operationalise the factory.”

My reliable source at the ministry of Trade and Industry has revealed that they are importing raw sugar at the cost of US$600 per ton, which is higher than the cost of imported refined sugar. As at yesterday July 11, 2022, the ICUMSA 45 which is a refined white sugar costs between US$500 and US$540 per ton, depending on which country it is imported from. Meanwhile the minister said the raw sugar is cheaper. How could US$600 be cheaper than US$500 and US$540? This strategy is economically unwise and it would impoverish the local farmers and the youth of Central Region.

The Government of Ghana is engaging the International Monetary Fund (I.M.F) for a bailout, and the Minister of Trade and Industry who is a member of the Economic Management Team could not talk about homegrown policy which Komenda Sugar Factory is the best example. But he was proud to explain how they will import raw sugar to defeat the rationale behind the establishment of the sugar factory as an import substitute.