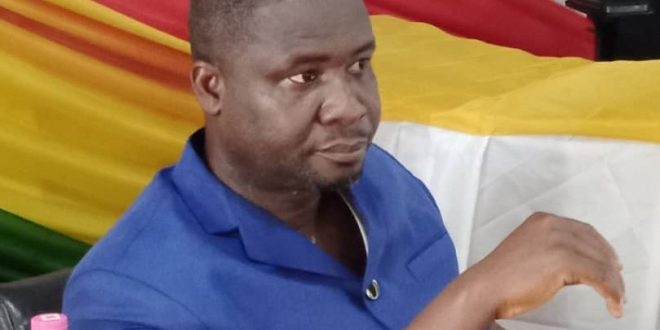 The Kumasi High Court 3 has issued a warrant to the Superintendent of Police and other police officers within it’s jurisdiction to arrest the Municipal Chief Executive of the Atwima Nwabiagya Municipal Assembly, Hon. Michael Amoah Awuku for failing to comply with the Court’s verdict.

According to documents sighted by MyGhanaMedia.com, the assembly and the municipal chief executive are supposed to compensate 12 store operators who got their buildings demolished due to the reconstruction of the Sofoline-Sunyani road and a police station.

The 12 apparently sought justice from the Kumasi High court for their monies to be paid to them.

The court on Thursday, December 2,2021,  Presiding Judge, his Lordship Justice Obiri Francis presided fined the Municipal Assembly should also pay Ten Thousand Ghana Cedis (¢10,000 .00) to the court whiles the MCE, Hon. Michael Amoah Awuku to pay ¢30,000.00  respectively to the 12 victims as compensation within 24 hours which they failed to do so leading to a released warrant of arrest on him. 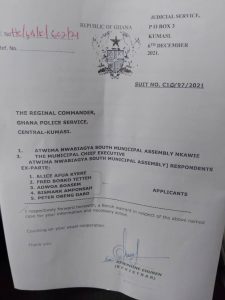 According to the report by Kessben FM’s reporter, Mallam Yahaya from the court on Tuesday, 7th December said, the court invited the Municipal Chief Executive, Hon. Micheal Awuku but has been reluctant to show up.

The court presided by his Lordship Francis Obiri on Tuesday directed the Ghana police for the arrest of the MCE after consistently failing to avail himself.

Currently, the whereabouts of the Municipal Chief Executive is nowhere to be found after the court ordered for his arrest.

Watch the video below for more details :

I'm Adwenpa-Hene |Blogger & Broadcaster Journalist. I am the CEO and manager of this noble website. I publish on Entertainment, Sports, Politics, Lifestyle, and Technology. You can also follow Us on : YouTube Channel - My Ghana Media TV, Facebook - MyghanaMedia TV , Twitter - @MyGhanamedia2 & Instagram - My Ghana Media TV. Email Address: [email protected] Contact Us: 0200818719
@@MyGhanamedia2
Previous NAGRAT Distances Itself From All Teachers Alliance Over One Teacher, One Laptop Deductions
Next Western Region: Court Issues Bench Warrant For Arrest Of NDC MP